Years of planning, outfitting, and cruising around the world will come to a finale in less than one year.  That year is going to go by so fast, and before you know it, we will be in the Caribbean, crossing our wake.  We are estimating to be there in April of 2020.

As the date approaches, we are getting asked more and more often – what’s next?  After the daily mundanities of cruising life (weather windows, provisioning, etc) it’s become our biggest topic to talk about.  Here’s our (current) answer.

We will start 2020 in South Africa.  Since we hope to cross our wake in the Caribbean in April, we have a lot of ground to cover.  Probable stops include Saint Helena, Ascension, Brazil, and Tobago.  The exact when and where of crossing our wake is still TBD.

Starry Horizons Will Not Be For Sale in 2020

One thing we can agree on is that we aren’t ready to give up cruising yet.  My biggest fear in selling our beautiful boat is that within months (or days!) of signing the papers, we might regret it.  We’ve invested so much time and money into Starry Horizons, it would be a shame to sell her only to decide a few months down the line that we still want to cruise.

We Will Take a Break From Cruising

We are currently looking for a place to store Starry Horizons for hurricane season in 2020. We’ve narrowed our options down to a few yards in Rhode Island where we can leave Starry Horizons on the hard for the summer season.

David and I will return to Texas for a long visit.  The last time we were in Texas for more than two weeks at a time will have been three and a half years prior.  Ten-day visits home are great for doing the essentials (splitting our time between Houston and Dallas with our families) but it does not get us time to relax, recuperate from boat life, and see everyone we want to.

Our biggest priority will be finishing our videos. Right now we are seven months behind.  David and I both work on videos all the time, with David doing at least 15-20 hours a week of video production.  We’d love to power through the videos and finish the story of our circumnavigation.

Undoubtedly we will do some other travel too, definitely in the states visiting family, but also perhaps some international trips – maybe even sailing ones!  We have a few ideas in the works.

Then, we hope to drive back to Starry Horizons during a leisurely road trip; who knows, we may even get to stop at the Annapolis Boat Show?

We will at least do one more cruising season.  We’d like to spend some time cruising without the pressures the last few years have had.  Our video production will decline (or stop altogether) and we will choose a short-term route with less pressure on us.  Despite taking a fairly moderately paced route for our circumnavigation, we’ve still felt rushed everywhere.  There’s seasonality, tradewinds, and thousands of stops to be made in a circumnavigation, so time always seems too short.

What will we spend our one additional cruising season doing?  Here are a few thoughts we’ve had.

Cruising the Bahamas for a season has a lot of benefits; we will be close to home*, easier anchorages*, English-speaking, good provisioning*, and truly beautiful.  Our friends Frank and Mary Grace spent an entire season in the Bahamas, never running out of islands to visit and things to do.  We did cruise the Bahamas for three weeks – and barely scratched the surface.  We didn’t see the swimming pigs or Thunderball Grotto!

*It’s all relative.  Some people may find these things less than satisfactory but with a year cruising South East Asia and the Indian Ocean, the Bahamas is a cakewalk.

Wes went swimming with the sharks when we were in the Exumas! Right in this location we saw dozens of sharks (different kinds too!), several big sea turtles, rays, conchs, and lots of different fish. This isn’t an enclosed habitat- the Bahama Islands just have so much natural sea life 😍

Cross the Atlantic and Cruise the Mediterranean

Most private Fountaine Pajots seem to swing a left when they hit the Strait of Gibraltar and head to the Mediterranean.  This didn’t hold a lot of appeal to me initially, but thanks to the network of cruisers we’ve been following (especially Lady Rosyln in IG) we can see that the Mediterranean has some truly stunning places and would be worth the visit.

The downside for cruising the Mediterranean is the weather and visas.  Bookended by two Atlantic crossings, cruisers who are interested in cruising the Mediterranean for one season typically spend the summers in the Mediterranean.  Seasonality in the weather often nails sailors with tough blows, and safe harbors and conservative sailing is necessary.  In addition, as US citizens, we only get 90-day visas to use over 180 days into the Schengen area.  Essentially, this cuts the cruising season in half for Schengen areas, and after our Schengen time is up, we would be limited to countries like Croatia, Turkey, and Tunisia (all are reputed the be excellent cruising grounds).

A route that’s always been intriguing, we have more and more friends who are doing the North Pacific Loop.  There are several routes you could take, but the general gist is to go from the South Pacific up to Japan (via Micronesia and/or Guam) before crossing up to Alaska and working our way down the west coast of the United States.

What intrigues us about this route is the combination of our most favorite cruising ground – the South Pacific – and exotic locales off the main cruising routes.  To close the loop, we’d sail down through Mexico, stopping in the Sea of Cortez, another stellar cruising ground we’ve missed.  The negative aspects are that we would once again be pitting ourselves against the clock; it’s a lot of ground to cover in a short amount of time (one year).

What do you think we should do after completing our circumnavigation? 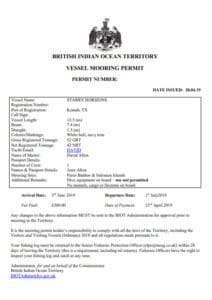 Applying for a Permit to Chagos (BIOT)
We use cookies to ensure that we give you the best experience on our website. If you continue to use this site we will assume that you are happy with it.OkPrivacy policy