Paris; a Reflection of Five Trips

While waiting or our new boat, Starry Horizons, to be launched from the Fountaine Pajot factory, David and I did some trips around Europe.  We started by taking the train from La Rochelle to Paris, a 3-hour trip.  This was my 5th visit to Paris, and a city like Paris is full of so many things to do.

My first visit to Paris was in 1999 for spring break.  My dad took us to Paris, France and Bern, Switzerland.  I was 14 years old, and don’t remember a whole lot.  I do remember meeting my cousins: Julien, my 4th cousin; Valerie, his mother, my dad’s age; and Joelle, his grandmother.  Valerie worked for a senator, and she took us on a tour of the Senate.

I don’t remember much else but I’m sure we did a lot of touristy things.  There are plenty of things to do on your first visit to Paris.

In the summer of 2004, my grandmother took me on a trip to France.  We spent a few days in Paris (again visiting my cousins), before heading out to Provance.  I have almost no pictures from my time in Paris, but I do remember visiting the Musee d’Orsay with my grandmother.

I went to Europe for 3 weeks after graduating from college in 2008.  I stayed in Paris alone, at a bed and breakfast near the Moulin Rouge (this was before Airbnb!).  Having already done the major attractions (Louvre, d’Orsay, and Eifell Tower), I was on my own to discover more of Paris.

Two of My Favorite Museums in the World

I found two of my favorite museums in the world; Musée Rodin and Musée de l’Orangerie.

Musee Rodin is a small sculpture garden featuring the work of Auguste Rodin, a French sculpture.  The setting is absolutely stunning, especially in the summer.  Rodin’s most famous works are here; The Thinker, The Kiss, and The Gates of Hell.  The museum resides in the 7th Arrondissement, the same neighborhood as Musée d’Orsay and the Eiffel Tower.

Musée de l’Orangerie is a small, underground museum in the 8th Arrondissement, next to the Seine River between the Champs-Élysées – Clemenceau and the Louvre.  The museum is entirely dedicated to Impressionist and Post-Impressionist works and is most notable for being the permanent residence of Claude Monet’s eight Water Lillies paintings.  The paintings are in giant oval-shaped rooms, with diffused natural lighting.  It’s simple and spectacular.

In 2010 my in-laws took us to Europe to visit David’s brother who was doing a study abroad in London.  All six of us went to Paris together, where I got to visit the Musée de l’Orangerie again, in addition to taking a French cooking class!  We made exclusively desserts like madeleines and crème brûlée and left stuffed to the gills with sugar.

David and I have a few days in Paris before we head off to Amsterdam.  We stay with my cousin Valerie, but get to catch up with a few other people too!

We meet our friends Vishnu and Frido.  Vishnu is one of David’s friends from High School.  She now lives in Zurich with Frido, her husband.  They were vacationing in Paris and it happened to overlap with our schedule.  We spent the day with them, enjoying Moroccan food for lunch at 404, and then walking around the Marais neighborhood of Paris.

Saturdays are the big shopping days, so the small streets were flooded with people.  We stopped at a few scenic places, such as Saint-Paul Saint-Louis Church on Rue de Rivoli, and Place des Vosges, which is a park where there were people picnicking, playing instruments and smoking hookah (we sat away from those people).  Rue de Rivoli is filled with shops and cafes.  Shops are specialized, so there is an entire shop dedicated to honey or another one for jams, and boulangeries (bakeries), patisseries (pastries), and fromageries (cheesemongers).  Almost every place gave out samples and many helped me learn the French words for items. All we bought was some Moroccan green tea with mint (because we enjoyed it so much at lunch) and some orange juice (gotta boost our immune system against all the traveling).

Finally, Frido and Vishnu took us to a French play.  Of course, we didn’t understand much, but the play was a bit weird anyway.  We had crepes (as an indulgent dinner) and then headed back to our apartment.

We spent the morning walked around Champs-Élysées and Tuileries Garden, which is the area between the Arc de Triomphe and the Louvre.  Since we’ve been to Paris so many times, we don’t have to do the obligatory tourist destinations like the Louvre and Eiffel Tower.  Instead, we behaved like Parisians and enjoyed the beautiful day.

In addition to Valerie, another distant cousin, who I had never met before, lives in Paris now, after growing up in Brazil.  He asked to meet with us.  Bruno is my 5th cousin, and in the branch that moved to Brazil while my branch moved to Louisiana.  He is an architect, and we were treated to a wonderful private architecture tour of the Marais neighborhood.  Bruno showed us the oldest building in Paris, as well as an underground cellar, which has a tunnel connecting it to the river.  He also took us to beautiful old mansions that now serve other functions – such as the Archives Nationales.

We had a simple dinner at Valerie’s house tonight, and are catching up on the internet and making plans for our next destination: Amsterdam!  As always, there’s plenty of stuff left for the next time we come to enjoy the Parisian culture.  Our train is tomorrow at 12:25 pm, so we get to have a slow morning. 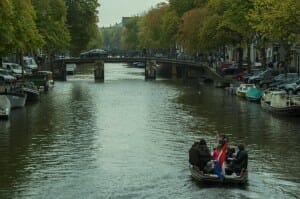 Two Days in Amsterdam
We use cookies to ensure that we give you the best experience on our website. If you continue to use this site we will assume that you are happy with it.OkPrivacy policy