After two months cruising the west coast of Thailand, we were ready to kick start our year crossing the Indian Ocean.

We actually sailed amazingly well on this passage.  We left Phuket expecting to motor for a bit until the wind picked up and sail for a few days before losing the wind again.  However, we only motored our first 20 hours.  Throughout the rest of our sail, the wind was forecasted to die and clock behind us, but it never did.

Occasionally, we had current against us, but more often the current was with us, pushing us along between 1 – 2 knots.

Big thanks to the Slow Flight crew, as we chatted with them using our Iridium Go the whole time.

Clearing Out of Thailand

Starry Horizons remained in Nai Harn while David and I took a taxi to Chalong Bay to clear out on February 18th.  It was only $15 USD to clear out with all the offices, and it went a lot faster than our clear in!

That night, we had a final dinner with the “Kid’s Table”; Carlos and Linda from Mirniy Okean, who we’ve cruised on and off with for the past 7 months, are staying in Southeast Asia for the year.  Kimi and Trevor are continuing on roughly the same route as we are.

We raised anchor at 8 am, just after sunrise, to head west.  Our first day there was absolutely no wind whatsoever – as expected.  We motored along with less than 4 knots of wind from directly behind us, meaning our apparent wind speed was near zero.  And it was HOT!

With no wind, the sea state was very calm.  However, occasionally we would find a 1-2 knot countercurrent that would slow us down and disrupt the surface of the water.  It was very weird.

I was on my first-night watch around midnight when I thought I heard dolphins at the bow.  The moon was full and bright, lighting up the deck for me as I (carefully) made my way to the shroud on the starboard side.  Suddenly, something large and black leaped out of the water just feet from the boat.  WHAT THE HELL WAS THAT?  It was too large to be a fish, too small to be a whale.

Thirty seconds later it jumped again, and I could see now that it was a dolphin, leaping out of the water and spinning, a black form against the glittering ocean.  It leaped again and again while we passed, leaping at least ten times until I could no longer see it in the distance behind us.

The dolphin wasn’t our only company.  The Celebrity Constellation cruise ship passed a few miles off our starboard side.  I flashed our spotlight towards it for a few seconds, wondering if any passengers were watching the black sea slip by from the cabin windows.

Finally, at 2 am David came up and we decided the wind had picked up enough to raise the sails.  I left David with the main and genoa up, motorsailing along.

Passing the Andaman and Nicobar Islands

Just a few hours after I went off watch, the wind picked up enough that David switched us to the screecher and turned off the engines.  We were finally sailing!  The day was much nicer once the wind had picked up.  We weren’t sitting in pools of sweat anymore.

Our third morning we passed the Andaman and Nicobar Islands (part of India) between Nancowry Island and Little Nicobar, which has a wide gap between the islands.  We’re about 270 miles south of North Sentinel Island, where an American missionary attempted to join and convert a native tribe which doesn’t have communication with the outside world and was killed.

Despite forecasts saying the wind would die and fall behind us, on our third night the wind actually picked up from ahead and we had to switch to the genoa (apparent wind speed of 15+ knots).  That only lasted about 6 hours, and then we were back to rolling out the screecher in the early hours of the morning.

Not Much to do but Fish and Watch Dolphins

On day four we put our lines out and got a bite mid-day; a wahoo.  They aren’t the best eating, but I love having fresh fish so we made ready to land the fish – and the line snapped.

Day five we saw some fishing ships on AIS.  Where there are fishermen, there are fish.  We had our fishing line go off and saw a mahi-mahi on the other end, but he got away.   Then, the line went off again.  We reeled in a very small bigeye tuna, so small we let him go.  Just before sunset, we moved the screecher to the windward bow, as the wind had finally clocked behind us, but was still strong enough to sail. As we were winding down for the night, a pod of dolphins came to join us and play off the bow.

…Or Fly the Drone & Fish

Day six, we flew the drone and got some stunning shots of Starry Horizons with her screecher out on the windward bow.   I was down for my afternoon nap when the fishing line went off – wwhhhhhhrrrrrr! – and we reeled in a good-sized skipjack tuna.  Tuna sashimi for dinner!

We Break our Furler and Bob Around for a Bit

At the end of day six, we were at our last night before we arrive in Sri Lanka.  We were about 20 miles from land, but there was only an hour or two till sunset, so we weren’t going to make it.  David and I went to bring down the screecher, but David was having some difficulty with the furler.  Upon closer inspection, the line had come out of the furler and we were unable to properly furl the sail.

Thankfully, we kept our cool, got our marriage saver headsets on, and came up with a plan.  We kicked both engines on and turned almost dead downwind (we still had the main up).  The engines gave us more boost and helped drop the apparent wind speed to about 7 knots.  With wind speeds that low, we were able to drop the halyard of the screecher and David hauled the sheet in to get the sail on deck.

Once we put the screecher away, we set up Starry Horizons to heave-to for the night.  The wind was at 50 degrees to our starboard side, the main had two reefs in it, the genoa was reefed and backwinded, and the rudder was set to the port side.  Starry Horizons moved at 2 knots north and perpendicular to shore for a few hours.  Then, I tacked us and we ran back in the opposite direction.

At least a month ago I had started looking into formalities for Sri Lanka. There are three ports of entry in Sri Lanka; Colombo, Galle, and Trincomalee.  Trincomalee is fairly new, but an increasing number of cruisers stop here because it’s the nicer port of the three.  Colombo is a big city with limited cruising amenities.  Galle, to quote Noonsite: “it’s likely a not a port you would want to spend much time in.”

We needed to hire an agent to get into the country, and from some Indian Ocean sailing facebook groups, I’d ‘met’ Sandeep, an agent who works for GAC, a ship agency.  Sandeep is located in Trincomalee, and he’s very active in the online community.  This is a great service offered, especially since cruising boats are a small percentage of GAC’s business.

Prior to our departure, we’d sent Sandeep all the requested forms and files.  We applied for a 30-day visa online for both of us ($35 each). Twenty-four hours prior to our arrival in Trincomalee, we emailed Sandeep with our ETA.  You are NOT allowed to arrive into Trincomalee in the dark.

Clearing into Sri Lanka in Trincomalee

When the sun came up on February 26th, David brought the sails down and motored us into the harbour.  We hailed port control on VHF channel 16 and gave them our ETA.  While on our way in, we were stopped by a navy ship and asked a few questions; the name of our boat, how many people onboard, and where we came from.

Interestingly, when Slow Flight came through, the navy ship tried to detain them, saying they didn’t have permission to come into the country.  Slow Flight was able to contact us on VHF (we were expecting them) and we contacted Sandeep.  Sandeep said the Navy was probably misunderstanding the boat name.  Between Kimi and Trevor clarifying the name Slow Flight and Sandeep calling the Navy, they were able to get through.

The customs dock at Trincomalee is a concrete pier with big tire fenders.  We tied up at the end and there were already officials waiting for us.  However, they waited until Sandeep arrived to board the boat.  We had three officials onboard, plus Sandeep.  We finished our paperwork, and then the Captain (David) had to go to the Customs office to finish paperwork.  All in all, it took us about three hours to get cleared in.

When we left, we had to hail Port Control again, and then hail them once we anchored just off the jetty.  Basically, this is a pretty heavy military zone, and Port Control wants to know your whereabouts all the time.

The anchorage is excellent here, very well protected and in 12 feet of water.  Tides here only have a two-foot swing.  Aside from the occasional wake, it feels like we are on land.  The harbor is very safe because of the military presence here.  Sandeep and his team at GAC watch over the boats and organize diesel.

No matter what port you come into in Sri Lanka, if you want to move you must clear out of the country and back in. Because of this, Sri Lanka is not a cruising destination.  However, many cruisers leave their boat for weeks at a time and explore the rest of the island.  That’s what we are going to do; I’ve planned 12 days to explore Sri Lanka. 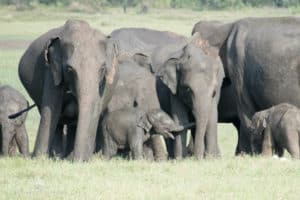 Minneriya National Park 3-Hour Jeep Safari
We use cookies to ensure that we give you the best experience on our website. If you continue to use this site we will assume that you are happy with it.OkPrivacy policy