We visited Phi Phi Don twice; once over the Christmas holidays, and a second time a few weeks later.  Our first impression of Phi Phi over the holidays was not great: it was absolutely packed with people and loud music played every night into the wee hours of the morning.  When we returned a few weeks later, it was much less crowded, and while the music still played from the village, we were in a quieter spot.

How to Escape the Crowds

I wasn’t wild about the idea of packing myself in with the tourist groups in Phi Phi.  We were visiting in peak season (winter) and the tourist destinations were packed all the time!  I also really did not want to do a snorkeling tour – you must wear a life jacket and you jump in the water with dozens of other people.

One Day in Phi Phi

It’s pretty easy to do the highlights in one day on Phi Phi island.  Hike in the morning, and rent a kayak in the afternoon to snorkel and hit up Monky Beach.

We were lucky to be staying on our boat on a mooring ball just off Monkey Beach.  The traffic to the beach was insane during the daytime – speed boats coming and going, tourists in their orange lifejackets bobbing in the swim zones, and tour guides up on the beach, feeding the monkeys, despite the signs warning not to.

Monkey Beach is hard to access at low tide, as the beach gets rocky when the tide is low.  Also, because of the above-mentioned tour boats, it’s insanely crowded during the day.  The timing worked just right for us; the tide was dropping low enough just before sunset.  We took our dinghy to the beach an hour or so before sunset.  The high cliffs surrounding Monkey Beach means that the whole beach is in the shade very early.

If you want to avoid a bustling tour, try booking a kayak rental.  Kayak rentals are very popular, and they paddled by all day.  In the late afternoon, though, there were often the only ones on the beach with us.

There are a lot of monkeys living on the beach, and yes, people do come to feed them.  We never did, and we still enjoyed getting fairly up close and personal with the monkeys, including babies!

Monkey Beach has two roped off areas for swimmers on either side of a small boat channel.  However, the best snorkeling is just north of Monkey Beach, outside of the ropes and along the wall.  We snorkeled four times!

Hiking to the Viewpoint of Phi Phi

Unfortunately, coming from the boat, we were restricted by the tide.  Boats can only access the north bay’s beach between mid-tide and high-tide.  While it would have been nice to hike to the viewpoint of Phi Phi for sunrise, we were stuck with the middle of the day.

It is not a long hike, though.  There are signs from the main village leading to the viewpoint.

In Phi Phi, there is an entire restaurant devoted to the various forms of my favorite Thai dessert: mango sticky rice!  The Mango Garden has a mango-centric menu, but we just went with the classic dish for a treat after the hike.

Where to Eat in Phi Phi

Our favorite meal was at Anna’s restaurant.  David had a schnitzel he really enjoyed (the owner is German) and I had the pineapple fried rice (delicious!).

For months we’d been planning to spend Christmas with Carlos in Thailand.  The timing worked out well to meet up in Phi Phi – Carlos was coming down from having cleared into Phuket and we were coming up after our Satun haul out.  We picked up our mooring ball next to Mirniy Okean on the 23rd.

Christmas Eve we took the dinghy into shore on a hunt for seafood.  The grocery shopping in Phi Phi blew my mind – as did the crowds of tourists.  We were able to buy prawns, squids, and lobsters for a special Christmas Eve paella.

Christmas morning I baked cinnamon rolls (something new for Carlos!) and we went for our first snorkel since Palau Payar in Malaysia.

David’s sister Julie came to visit us at the end of our haul out at G&T.  After launching we moved down to Phi Phi, arriving on the 23rd of January.  We got two snorkels in, plus a visit to Monkey Beach and some general exploration of Phi Phi.  Julie stayed with us in Phi Phi for two nights before taking the ferry back to Phuket to catch her flight.  Carlanna, one of my best friends, arrived that same day.  With Carlanna, we snorkeled again, hiked to the viewpoint, and visited Monkey Beach. 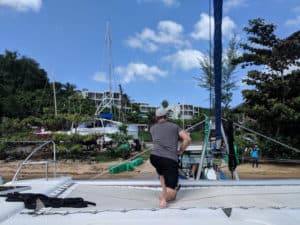 Haul Out at G&T Boat Yard in Phuket, Thailand
We use cookies to ensure that we give you the best experience on our website. If you continue to use this site we will assume that you are happy with it.OkPrivacy policy