10 Adventures to Inspire You

In this day and age, the internet is filled with people getting the word out about their fabulous adventures!  While we take inspiration from a lot of the obvious ones who are doing similar trips to us (like Delos and Roam), we find travel inspiration in a variety of places.  Here are some adventures we found that we think are amazing (and yes, most of them are sailing themed!).

Yohela (2006-2008), Monkey Fist (2014 – 2017), and Zero (2015-2017) have all done the North Pacific Loop.  Let’s say you start in San Francisco – you work your way down the west coast of the Americas to popular Pacific Crossing jump-off point Puerto Vallarta, Mexico or Ecuador.  Sailing through the South Pacific, you leave the masses and sail from Tonga up to Tuvala, Marshall Island, Micronesia, and Guam before jumping up to Japan.  From Japan, you can head towards Alaska and the remote Aleutians islands before heading back down the west coast.

Are the tropics too warm for you?  How about an adventure up and over Canada?  Chris and Jess from Yacht Teleport bought their junk-rigged boat in Halifax in 2010 and started out to sail her up and over, and then back down to Australia.  They ended up selling the boat in Prince Rupert, Canada in 2017.

Travel by Rail Through Russia (and/or Mongolia and China)

Darrell and Manch from Intrepid Travel have a photographic journey on the Trans-Mongolian Railroad.  An 8,000-mile adventure from St Petersburg to Beijing, with stops in major cities and rustic towns, sleeping on the train car and in yurts.

Vloggers Kara and Nate have set a goal to travel to 100 countries by 2019.  They’ve hit 61 countries at the time of writing this, whereas I’ve only hit 35 countries out of the list of 195.  Not only that, but they make fantastic videos about their adventures.

Travel the World, Retire Early.  Sounds great, right?  That’s what Jeremy and Winnie of Go Curry Cracker are doing after retiring in their 30s.  Bonus, they are even raising their kid while traveling, and he hit 16 countries before 16 months old.  Their blog is primarily a financial one instead of a travel journal like ours, so it’s chock full of tips for how to achieve financial independence, as well as making the most of travel hacking.

In addition to doing the Northwest passage, the Cottier family on S/V Libellule has been sailing their Fountaine Pajot Salina through some of the wildest and remote stretches of the sailable world – the Arctic and Antarctic regions.  They’ve sailed as far north as Svalbard (one of the world’s northernmost inhabited areas) and as far south as Antarctica.  They think they are the first catamaran to have crossed both polar circles. **Note, this blog is in French, I use Google Chrome’s translate feature to read it.**

Smalltown America, the ICW, some of the biggest cities in the United States make the Great Loop an adventure worth considering. Captain John is a great resource for learning more, as is the Great Loop Cruiser’s Association.

In 2014, Ryan Sclar biked from Lisbon Portugal to Shanghai China; nearly 17,000 miles over 254 days.  Former cruisers Mike and Rebecca Sweeney of Zero to Cruising are biking from Mexico towards Argentina.  The amount of physical endurance these trips take is staggering….good on them!

Build Your Own Boat

Ridge and Jessie lived about their 1996 Fountaine Pajot Venezia 42 for a few years, and have now moved on to land life – but only temporarily.  They are currently building a Schionning Arrow 1280S in Virginia.  As you may remember, Schionnings are David’s favorite boats (well, maybe aside from Gunboats).  They are at the early start of their boat building process, so David and I look forward to following along from the ground up (literally).

Circumnavigating the World on a Sailboat

Hang on – that sounds familiar…

Which adventure would you choose? 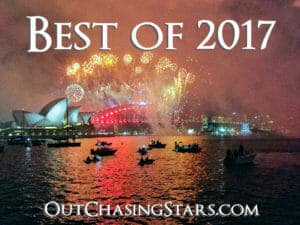 Top 10 Best of 2017
We use cookies to ensure that we give you the best experience on our website. If you continue to use this site we will assume that you are happy with it.OkPrivacy policy