One of our favorite pieces of gear aboard Starry Horizons are our marriage saver headsets.

Why Do You Need Marriage Savers?

David and I are anchored in Lunenburg, Nova Scotia when another sailboat pulls up ahead of us to anchor.  The man is upfront, getting ready to drop the anchor while his female partner is at the helm.  They start their maneuvers and begin dropping the anchor.  Suddenly the woman is yelling and gesturing, trying to capture her partner’s attention.  With his head in the anchor locker, he’s unable to hear her over the sound of the windlass working.

To grab his attention, the woman leaves the helm unattended, stomps forward in the deck and slams her palm onto her partner’s shoulder.  With his attention received, she’s loudly exclaiming and gesticulating wildly.  The whole thing would have been comical except the unattended vessel drifting closer and closer to us.

We later found out that their engine was unable to shift while they were anchoring.  That’s pretty serious, but it could have been worse.

Headsets are a popular gadget aboard cruising boats, and cruisers sometimes call them Marriage Savers!   Marriage Savers used to be a brand of headsets made specifically for cruisers, but the company either no longer exists or no longer sells them.

We used to have a pair of headsets we ordered from Amazon with a clip-on unit that attached to the headset via a cord.   There was always a lot of static noise.  The worst noise happened when David had to stick his head in the anchor locker.  We attached the main unit to our waists, which was part of the problem.  The helm pod, with all the electronics, was between my unit and David’s unit.  There was often a lot of noise and static.  Eventually, we stopped using them in lieu of hand signals.

While sailing on Julia, Tom and Susan had new fancy Bluetooth headsets.  They worked very well, so we ordered our own pair before we left Hawaii.

Our new marriage saver headsets work incredibly well.  We use them while docking, anchoring, or going up the mast.  We can talk to each other from anywhere on the boat – while I’m at the helm, David can be in the engine room, forward cabin, or anchor locker.

The marriage savers nickname makes a lot of sense.  When docking, anchoring, or any other stressful situation, your partner can misinterpret yelling with being upset.  We avoid all that hassle by being able to speak in a normal voice with each other anytime. 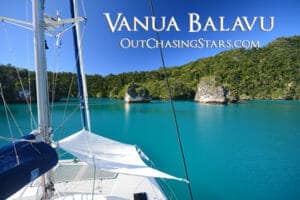 Vanua Balavu, the Lau Group of Fiji
We use cookies to ensure that we give you the best experience on our website. If you continue to use this site we will assume that you are happy with it.OkPrivacy policy