We had a few weeks of free time while living in La Rochelle, we took off for Paris and Amsterdam, but also wanted to get a taste of the small, coastal French towns, and that led us to the nearby Île de Ré for a weekend.

Why Visit Ile de Re?

Ile de Re is a small island off the coast of France in the Bay of Biscay.  It’s a popular tourist destination, especially for French living in northern parts.  The island has a milder climate, comparable to the weather in the South of France.  The winter population is a little over 20,000, while the summer population blossoms to 220,000.  The island is known for its fresh seafood and sea salt fields.

Arriving in Ile de Re

La Rochelle can be reached via 3-hour train ride from Paris, or a 45-minute flight from Paris.

We booked an AirBnB again, and our host offered (for a charge) to pick us up from the La Rochelle train station and bring us into Ile de Re.  The apartment was her guest house, so she was right next door.  The neighborhood is a very rustic part of Sainte-Marie-de-Re, with cobbled streets.  It looks like it should be on the Mediterranean, with the tiled roofs and backyard gardens.

We immediately had dinner at Creperie Les Tilleuls, and I had my favorite galette so far – duck and roasted apples with caramel and pineau (a liquor).  The duck was delicious!  David enjoyed the pizza.  The restaurant was in an old house and focuses on local seafood.  It was very nautical.

The big thing on the island Ile de Re is biking.  Everyone bikes everywhere, because the island is quite big, and cars cannot get as many places due to narrow streets.  So in the morning, after pastries for breakfast, we rented bikes, and took off for a tour around the island!

We started out by biking to the beach to take the Atlantic in!  The beach was at low tide and is very expansive.  We spent a lot of time walking around and checking out the fish locks.  These man-made, u-shaped lagoons fill with water at high tide.  When the tide rushes out, the only escape in the bowl of the U is a gate.  Big fish can’t fit through the gate, so they become trapped in the small pool in the U.  I have pointed them out in this Google earth picture:

There were people catching the fish, as well as hunting for crabs (we think).  We also saw shrimp and signs of clams.

From there we biked to the center of Sainte-Marie-de-Re and had lunch at Chai Pepette (roast beef, green beans, and potatoes).

Then it was onward to Saint-Martin-de-Re, the largest city on Ile de Re.  The ride was wonderful, with either forest or French wine vineyards on both sides.  We were so lucky to have such wonderful weather too!

Saint-Martin is known for the fortification and citadel (which, by the way, held the Brits off in 1627).  The city is a UNESCO World Heritage site, and it is a lot like La Rochelle, but smaller.  We parked our bikes at the beginning of the citadel and walked into town.  The town is based around the harbor, and small cafes line the waterfront.  We picked up some ice cream (not as good as Ernest le glacier in La Rochelle) and then biked back.  It was a lot of biking!

Then our host took us back to La Rochelle! What a wonderful weekend in a quaint place. 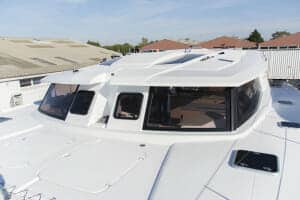 Fountaine Pajot Factory Tour
We use cookies to ensure that we give you the best experience on our website. If you continue to use this site we will assume that you are happy with it.OkPrivacy policy