While waiting or our new boat, Starry Horizons, to be launched from the Fountaine Pajot factory, David and I did some trips around Europe.  Neither of us had been to Amsterdam, so we took off on the train from La Rochelle to Paris, and after a few days in Paris took the train to Amsterdam.

Our first day in Amsterdam (October 22nd) started with the Van Gogh Museum. It took us longer to get out the door than anticipated, we took multiple wrong turns, and we got distracted by a street market.  We finally made it to the Van Gogh Museum at about 11:30. The museum was very nice, (obviously) a lot of Van Goghs, but also works by his contemporaries and a section about his family and the development of the museum.

At the street market in Amsterdam.

Afterward, we headed to a nice pancake place for lunch. These Dutch pancakes were just a bit thicker than crepes and instead of folded, they were simply topped with their goodies. Mine had cheese and bacon, David’s was ham and cheese.

Afterward, we hopped on the Blue Boat Canal tour which was a great way to see the whole town and learn all kinds of goodies about Amsterdam, such as:

From there we walked back to our apartment through a park and enjoyed some takeout Indian food from the Tandori place down the street and watched some Dutch tv!

The next day we stopped first at the Houseboat Museum (which is actually in a houseboat). This houseboat was an old shipping boat, which had crew quarters but had since been converted.

Next, we were prepared for the long line at the Anne Frank House since we had noticed it while passing by the day before.  The house was well done but sad and slow-moving. David and I topped that off with a conversation about racism issues we see in the states (and elsewhere).

It was pretty amazing to walk the halls and rooms that are the setting for a story nearly every American read in school.  It was PACKED though, as expected.

Next up we went to the Amsterdam Tulip Museum. Unfortunately, this is not the time of year to see tulips, so we had to settle for the museum. It was a cute, small museum with history about tulips and the tulip trade and crash.

We spent some time walking around some shopping areas on our way to Centrum (center district of Amsterdam).   had dinner at a Chinese place and then cocktails (er, David had hot cocoa, I had cocktails) until it was late enough to check out the red light district.

Honestly, not too much to be said about the red light district. I was expecting it to be like bourbon street – loud music, lots of drunks, and half-naked women dancing around. But it was quieter than that. No loud music, just women in bikinis standing in windows. The streets are filled with signs for sex shops and live sex shows.  Despite that, the crowd was much tamer than I expected.

We stayed at a beautiful Airbnb in the Oud-West district.  It was less than 2 km to everything that we did, so we just walked everywhere.  Amsterdam is not really that big, at least to the touristy stuff.  For more ideas, check out where to stay in Amsterdam.

Europe’s train system is amazing – seriously puts the US to shame. We took the train from Paris to Amsterdam, which was just a three-hour trip on Thalys.

In retrospect, we should have done the trains a bit differently. We didn’t realize we had so much free time in Europe, so we didn’t plan in advance. However, if you do know in advance, buy your RailPass when you are still in the US.

I did not know that Eurail passes were created specifically for non-EU residents and that not all trains accept e-tickets. Typically you order a rail pass and it is mailed to you in the states before you leave.

Ideally, we should have bought a RailPass of some kind, probably the France-Benelux pass, would have given us 5-10 travel days in France, Belgium, The Netherlands, and Luxemburg. That would include travel within France, so our first day of travel could have been our train from Paris to La Rochelle. The Eurail pass would have saved us about 50% of the cost of buying individual train tickets.

More Than Two Days in Amsterdam

We have enjoyed Amsterdam, and are on to Ile de Ré! 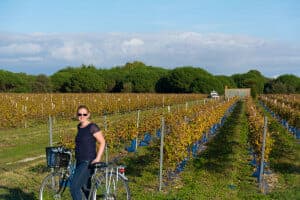 Île de Ré Bike Tour
We use cookies to ensure that we give you the best experience on our website. If you continue to use this site we will assume that you are happy with it.OkPrivacy policy