Geographically, Cape Town sits on the north side of the Cape Peninsula, and one of the best things to do in Cape Town is to explore a bit of the urban sprawl that stretches out onto the peninsula.  This easy day trip includes beautiful beaches, unique wildlife, one of the most beautiful drives in the world, and some excellent food choices.

David and I visited the peninsula on our first trip to South Africa back in 2010, but we did the trip again with David’s brother, Thomas, who was visiting us for the holidays during our five-week stay in Cape Town this year.  I also made several trips back out around the peninsula, running errands and scuba diving False Bay.

Starting from Cape Town, head towards Muizenberg, a beachside town on the east side of the peninsula.  The beach is popular with locals, even on windy days like the day we made the trip.

Muizenberg sits in False Bay, named because explorers and traders would come into False Bay instead of Table Bay, intending to visit the port that would become Cape Town.  The beach at False Bay is wide and long, stretching out into the distance.  The bay itself is also huge, and the points of the Cape of Good Hope and Cape Hangklip protect the bay on either side.

The most iconic part of the beach is the changing shacks.  There are two rows of the colorful rooms lining the beach, the longer row having fifteen rooms.

Muizenberg beach has an information booth for the Shark Spotters – a team of volunteers who watch False Bay for sharks – great whites and others – to sound the alarm and evacuate the waters of the beach.  The information booth on Muizenberg has a lot of interesting tidbits about the local wildlife and lists the most recent sightings and locations. You can see the Shark Shack as you drive the upper road leaving Muizenberg.

The next stop was one of the top things I wanted to do in Cape Town – and all of South Africa – see the penguins!  While we must have done this on our 2010 trip, I have no memory of it!

The Boulders Penguin Colony is just south of Simonstown.  Because of the holiday, it was pretty crowded, so parking was challenging.  Thankfully our friends Margot and Luke were meeting up with us and recommended a location.  I didn’t think the beach itself was too packed though, so that was good.

We parked at a golf course across from Windmill Beach and walked down to the access point.  It pays to keep a sharp eye out, as we saw a few lone penguins in the surf or hiding in the bushes.  But, wow, once we got around to the colony, there were plenty of penguins.

We entered the actual park at Boulders Beach, which is the primary swimming area. We didn’t bring suits (or costumes, as they would say here), but you can swim or walk from Boulders to a few of the other beaches. Entry fees were R160 each.

If you want to swim, high tide is best, but if you want more beach, low tide is best.  It does make a big difference.  Either place you lounge, don’t be surprised to see a penguin pop up now and then!  From the walkway, we could often see them swimming like high-speed bullets through the water around swimmers.

Foxy Beach is where the main colony is, with two viewing platforms.  We were so lucky so enjoy the view of the colony, and get to spot chicks and eggs!

Drive to the Cape of Good Hope

A special spot of Cape Town (especially to sailor’s passing by!) is the Cape of Good Hope.  While it is NOT technically where the Indian Ocean meets the Atlantic, nor is it the southernmost point of Africa, it is a beautiful place to look out over the ocean, and an important turning point for boats coming into Cape Town from the east.

On our drive out there in 2010, we enjoyed stopping to take in the view, poking into tide pools and posing with the Cape of Good Hope sign.  We also did see a lot of wildlife – including an ostrich we named Chips and a dassie.

From the Cape of Good Hope, we drove back towards Cape Town through one of the most beautiful drives in the world.  Chapmans Peak Drive, the M6, is carved into the cliff face and there are many gorgeous viewpoints to stop and admire the surroundings.  Noordhoek Beach is super quiet, but a wide and long beach.  Horseback riding is popular here.

Whitsand Beach is for the kiteboarders – the world record highest jump was set here at 32 meters high in 2019.

Hout Bay, in the north end of Chapman’s Pass, is a great place to stop for some food.  My friend Dino took me to Fish on the Rocks for some AMAZING fish ‘n chips – try the fried snoek for a local favorite.

From Hout Bay, things get back into city mode: Camp’s Bay with the ritzy residences, Clifton’s four beaches, and Sea Point with a public promenade.  We have not stopped at any of these places, but friends recommended Mojo Market for a fun place to grab something to eat (similar to V&A Food Market I expect).

Then, we were back in the city at the end of a pretty stellar day.

We rented our car from the CBD Hertz.  While the daily rate is cheap, be prepared to have a hefty hold placed on your car for damages.  If you go over the speed limit, you will be notified via text message, and then a fine will be charged to your card. 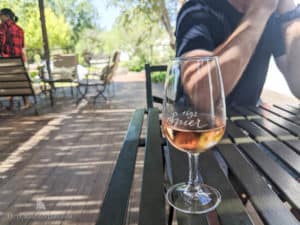 Stellenbosch Wine Tour: Day Trip from Cape Town
We use cookies to ensure that we give you the best experience on our website. If you continue to use this site we will assume that you are happy with it.OkPrivacy policy