When I got invited to go dive Aliwal Shoal with new friends, I jumped on the chance! Had I heard of Aliwal Shoal before? Yes. It’s one of the top dive sites in South Africa, maybe even the world. Did I know what I was getting myself into? Absolutely not. In the best way!

My only regret was not bringing our big camera. Usually, David handles it when we dive, and I have only used it a few times myself. Instead, I brought the GoPro, which did a spectacularly bad job of filming. Sorry for the low quality!

I dove with Aliwal Shoal Adventures, owned by my friends Michelle and Emil. It’s about a 40-minute drive from Durban Marina, where I was staying, to their place. I met the other divers joining us – two guys from the Durban Undersea Club and Zara, a 16-year-old local interested in studying marine biology. We had Emil as our dive lead and another man, who went as our “top man”.

We loaded our gear up into the 20-foot tender, which was on a trailer in the driveway. They have a great set up where a washing station and counters for gear are set up on a porch above the driveway and you can easily access the tender.

All ready to dive (I borrowed a 5mm wetsuit), we loaded up in the truck bed for the short drive to the Umkomazi River launch. This is where the fun began.

If the water is high, you can launch into the river from the ramp and motor out the entrance – pretty low-key. However, for our visit, the water was too low, so we had to do a beach launch. We walked the boat on the trailer out into the water until it started to float. Then we hopped in, slip our bootied feet into the floor straps, and hold on tight.

Now, the waves are rolling in pretty well here on the beach (I would not be able to land my dinghy). Emil drives, working the boat out into deeper water and we are pitching with the waves. Then Emil guns it. We’re running parallel to the shore and the breaking waves, and Emil is racing the foam. When the boat noses past the break, he spins the wheel and we glide up and over the swell.

It’s pretty calm out, and Emil guns the engine towards the shoal. It’s less than 15 minutes after the excitement is over that we arrive at Aliwal Shoal.

Emil takes us to a spot on the shoal where a tour boat has set up for a shark swim. Tourists are in the water, holding on to a bar with floats on both ends. Sharks circle them lazily….and really close.

These are not the blacktip reef sharks that I’ve swum with all over the Pacific Ocean. Those ones are nonchalant and small, they aren’t interested in swimmers at all. These sharks are the oceanic versions, larger, and much more noticeable on the surface. They swim pretty closely to the swimmers – who are being instructed to one-by-one return to the tender, keeping their hands behind their back. We only stop to look from above the surface.

Then it was time to dive in. The top man stayed in the boat to float while we dove. There were tenders and top men all over the place, waving hey to each other as we maneuvered into our spot.

Down we went, and we putzed around for a few minutes, spotting a huge stingray before one by one, the group disappeared under an arch. I was the last one in and got stopped a bit short because everyone else had stopped too. I couldn’t see why, so I just waited out of range of the fins until they were done with their photos.

When I came through the arch, I saw what we were looking for: ragged-tooth sharks. There were a lot of them! They’d pass by every few minutes, slow-moving with impressive teeth. Emil had told me they were extremely docile, and they showed no hesitation in getting really close.

The sharks were obviously the highlight, but we did also see a sea turtle, a huge potato bass, teeny tiny nudibranchs, and a frogfish.

Emil said he hoped to bring us into the river this time, but it was still too low. So we prepared for a beach landing; my feet were tucked into the foot straps and was holding onto the lacing of the tender. Emil floored it, and we zoomed to the beach, through the waves, and slammed into the beach! Newton’s first law kicked in and we all surged forward. I was impressed Zara’s elbow didn’t leave me with a black eye. The tender was at least 30 feet from the edge of the water, which was amazing!

It was a really great dive. I’m so glad I did it, though upset at myself for not bringing our big camera with me. 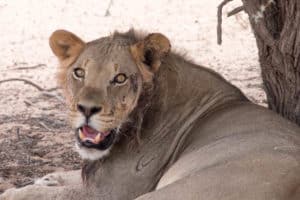 Kgalagadi Transfrontier Park: A 3-Night Safari
We use cookies to ensure that we give you the best experience on our website. If you continue to use this site we will assume that you are happy with it.OkPrivacy policy