Located on the southeast side of South Africa, Durban is all about the water. It’s known as one of South Africa’s top beach destinations, and of course, we wanted to explore this! We found out that bicycles are available for rent to ride along the “Golden Mile”, Durban’s beachfront promenade.

No longer a mile long, the promenade has expanded out to run 6.5 km from the northern point of the ship channel breakwater to the Umgemi River.

Everyone kept telling us that Durban isn’t safe. Be careful, don’t wear jewelry, etc. Don’t get me wrong, it is not a very safe city. We’ve been taking Ubers everywhere, even if it’s a short distance.

When we went biking on the Golden Mile, we didn’t bring our big cameras because we were too worried about safety. However, the Durban promenade is pretty touristy; there are people everywhere, with cameras and bags of stuff all over the place. We would have been fine (though it was nice to not mess with the big cameras for a day!).

We could not have ended up with a better day. The morning was sunny and bright and a bit hot for biking around. By the time we had lunch and got our bikes, the sky had clouded over. It was warm enough to glisten a bit while biking but not so hot we were uncomfortable or needed to put on sunscreen!

Where to Rent Bikes

We rented bikes from Xpressions on the Beach. Bicycle rentals are 60R for the first hour and 30R every additional hour. We rented our bikes for three hours and that was enough time to slowly cycle the entire Durban beachfront.

What to See Along Durban’s Beachfront

Here’s a list of all the things we stopped to see from south to north.

Named because it’s on the north side of the entrance channel into Durban. Durban is a HUGE port – one of the largest in Africa – so it’s pretty cool to be able to see any large ships coming and going.

We biked all the way out to the end of the pier, which gives a great view looking back to Durban as well.

The bike along the beach from North Pier is BRAND SPANKING NEW – this section of the promenade opened just days before we biked it. It’s wide, clean, and the surrounding area is still under construction. There are plans for a shopping mall and an open-air concert venue.

David and I aren’t keen on marine parks, but if you’ve got kids with you, this would be a great stop. There’s a massive waterpark in addition to the aquarium.

During our bike, we could see that sections of the beach were cordoned off by flags. Lifeguards had stations to monitor the people swimming. Even on a Friday, it was PACKED with people swimming.

This is done (just like in Australia) because the beaches here have crazy rip tides. It would be very easy to get caught and dragged out to sea.

Another alternative for kids (this one animal-free), Durban Funworld is an amusement park with several pools and rides.

We stopped into this public green space, first biking through the amphitheater, and then dismounting to wander through the gardens. The stonework was, although in disrepair, pretty cool, and there are lots of benches built into the gardens. We even saw some adorable ducklings!

While most people might know Miami for its Art Deco architecture, Durban might just have Miami beat. The city is full of examples of geometric styles and bold colors. Many of the buildings along the promenade are prime examples, though many of the buildings are falling into disrepair.

The Durban Art Deco Society has two self-guided tours; one walking, and one driving. The driving one includes the buildings you’ll see along the promenade.

Continuing the Art Deco theme, Suncoast Casino is hard to miss. This huge complex is open 24/7 for gambling, shows, dining, and a theatre (movies and live).

One of the host stadiums for the 2010 World Cup, Moses Mabhida Stadium can hold up to 80,000 people. It is accessed from the promenade by a short detour. It’s a unique spot on the skyline (we could see it while sailing into Durban) and in addition to hosting sporting games, you can bungee jump or take a ride on the world’s tallest swing.

The further north we went, the fewer tourists there seemed to be. Instead of European accents, we were hearing a lot more Afrikaans. And Laguna Beach Water Park was PACKED!

The end of the line, 6.5 km north of the North Pier. There’s a small jetty out where a lot of local fishermen were hanging out.

Where to Eat Along the Promenade

From south to north:

We ate at Surf Rider’s Cafe, which has a really great patio and is right next to Xpressions on the Beach. They have a really interesting menu. David has shrimp tacos (big, tasty, and messy) and I had a bao burger (pulled pork on a steamed bao bun: small, but very tasty). It’s on EatOut’s top restaurants in Durban for 2019.

Afro’s Chicken Shop is also rated as one of the best places to eat in Durban by EatOut guide. It’s South African street food, with a chicken-based menu.

Circus Cirus is all about fresh, local, and their comfy patio couches looking out over the promenade. Another on the top list!

There are heaps of restaurants in the Suncoast Casino complex. I’d probably choose Havana Grill.

Where to Stay in Durban

Budget (<$75 USD): Happy Hippo Accommodation and Curiocity Durban are just a few blocks away from the promenade.

Luxury: ($175-200 USD): The Palace All-Suite is just by uShaka in a classic Art Deco building. Southern Sun Elangeni & Maharani, just by the amphitheater, is more of a modern design. 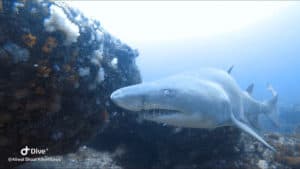 Diving Aliwal Shoal with Ragged-Tooth Sharks
We use cookies to ensure that we give you the best experience on our website. If you continue to use this site we will assume that you are happy with it.OkPrivacy policy