Pretty much everywhere we have been, especially the Caribbean has been chock full of production catamarans.  Fountaine Pajots, like ours, mingle with Leopards and Lagoons.  Occasionally there’s an Antares, a Catana, or an Outremer thrown in for funsies.  For three years, I’ve pointed at a catamaran and said “what’s that?” to David.  95% of the time, he rattled off a manufacturer name. Now, I don’t even have to ask.  I can identify most of the major manufacturers on my own.

But in Australia, the big three production cats are the odd man out.  Australians LOVE their small-batch catamarans, and boats like ours are the rarity.  In fact, a lot of the popular Australian brands are kit boats – designed and manufactured to be built at “home”.  While spending seven months cruising the east coast of Australia, we got to see many of these brands first-hand.

Seawind Cats is the largest production catamaran manufacturer in Australia, and bills themselves as “Australia’s most popular cruising catamaran”.  The boats are now built in Vietnam, but the company is still based in Australia.  Cruising World named the Seawind 1260 the Best Cruising Catamaran Under 50 Feet for 2019.  GlobeSailor has several Seawind Catamarans for charter in Australia.

Schionning may sound familiar to some of you, as they are one of David’s favorite designs.  Based in New South Wales, Schionning was founded in 1988, making it one of the longest running Australian companies.  The boats are kit boats, sold to be made yourself or by hiring a boat builder.  Ojigwan is a US-based company building a Schionning Arrow.

When we were at The Boat Works, we had the pleasure of meeting the owner and touring his boat, Kato, a gorgeous lightweight Schionning.  Additionally, when we were driving from Adelaide to Melbourne we visited two couples who are building their own Schionnings; Wildfire, who was launched early this year, and an unnamed Schionning, still a few years away.

Just like Schionning, Crowther is a design brand that was popular in the 1980s and 1990s.  Lock Crowther designed multihulls in Australia for over 25 years.  Designs were bought and built at home or with a boatbuilder.  While Crowthers are no longer built, there are a variety of Crowthers for sale on YachtWorld.

During the 2018 Sail 2 Indonesia Rally, there were two Perry catamarans in the fleet with us.  The boats were both gorgeous and well designed.  Perry catamarans are built in New South Wales.

When we first arrived into Coff’s Harbour, we docked next to the gorgeous Grainger catamaran named The Countess.  While the older designs have a lot of similarities to other brands on this list, the newer Raku Grainger designs are pretty sexy and higher performance.

The Lightwave Yachts production facility is located next door to The Boat Works in Coomera Australia.  For 20 years, Roger Overfell and his team have been building Lightwave cats that have sailed around the world.

There are a lot of Australian boats that are no longer built or that we didn’t encounter.  Choosing a cruising cat from the Australian market, or shipping over a kit boat to build in the States sure is intriguing! 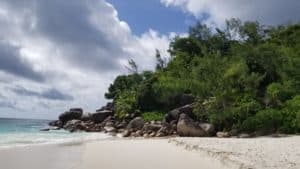 Two Hiking Fails on Praslin, Seychelles
We use cookies to ensure that we give you the best experience on our website. If you continue to use this site we will assume that you are happy with it.OkPrivacy policy