Our jeep creeps to a stop, and Richard shuts off the engine.  Another jeep faces us, engine off and headlights shining in the dusk. We wait quietly, the noises of the park around us.

Then, we see the movement; from the edges of the headlights next to us comes a pride of lions.  The lionesses walk leisurely through the headlights, passing just a few feet from the Jeep while we watch on, quiet and still.

We were in South Africa in June of 2010.  David and his friend Jon have won tickets to the first round US World Cup games through the lottery system.  We visited the country for three weeks, and the three games were each a week apart and near Johannesburg.  In between the first two games, we went to Cape Town, celebrating David’s birthday and enjoying the wine country.  Between the last two games, our travel agent recommended booking a safari in Kruger National Park – and we are so glad we did.

One of the largest game reserves in Africa, Kruger National Park is located in the northeast corner of South Africa.  It sits on the border with Mozambique and contains 7,500 square miles of protected park.  The park has more large mammal species than any other African reserve.

Honeyguide isn’t actually located in Kruger National Park; it claims to be in the “greater Kruger area”, which is actually Manyeleti Game Reserve, adjacent to Kruger without fences between the two.

We stayed for four nights at the safari camp.

Each of the tents on site has a concrete base with a tent over it.  The concrete also comes up to make a ceiling-less ensuite bathroom in the back with all the Western amenities.

The main room has a four-poster bed with mosquito screens that can come down, I don’t think we ever used them.  Beyond the bed is a sitting room with a couch, coffee table, desk, and wardrobe to store our stuff in with a lock – to protect our stuff from monkeys.

Each morning the staff banged drums well before sunrise to wake the guests up.  It was winter for the southern hemisphere, and WOW it was cold.  Hot beverages were brought to our room (ordered the night before) as we prepare ourselves for the day.

Bundled up, we made our way through the camp to load up into Jeeps.  The staff provided us with blankets and hot water bottles to keep us warm at the start of the drive, and off we went.  We were led by two rangers; a driver and a spotter.  Our driver was Richard, a young man who also carried the rifle (just in case).  The spotter was Thomas, an older guy who sat up on the nose of the Jeep in a special seat.  His job was to watch for tracks and guide Richard.  We had radio communication with the other Jeeps, and they would report back rare sightings.

We drove around the early mornings, with a break for hot beverages and light noshes.  As the morning progressed it warmed up until we had stowed all the blankets and jackets and were in shorts and tee-shirts.  Upon our arrival back at the camp, breakfast was served, a full-on hearty meal.  It was, as we would say in Texas, siesta time in the hottest part of the day.  A light lunch was served and then we were off for the evening safari.

During the second safari, we would stop for sunset, where Thomas and Richard served cocktails and hors d’oeuvres.  Then we would drive a bit longer as the nocturnal animals came out to play.

Finally, we went back to the lodge for dinner – a gourmet, three-course meal served family style in the dining room.  The food was all fantastic.

This was the rarest sighting we had, and we were so incredibly lucky to spot these animals.  The call came on the radio and Richard and Thomas sprang into action.  There are believed to be only about 400 individuals in Kruger National Park – rare indeed.  African Wild Dogs are recognized as an endangered species.

When we found this pack, they were playing on the side of a lake, acting much like our dogs at home would.

Cheetahs are also rare in Kruger National Park, although they are much more common in other areas of Africa.  These cheetahs played in the road, also drawing parallels to domesticated cats.

The lion experience was amazing. Our guides had been on the lookout the entire trip and their work was rewarded when a pride of lions walked around the Jeeps at dusk.

Buffalo carcass that the lions killed.

Did you know that hippopotamuses are more closely related to whales and dolphins than any other land mammal?  Also, they are one of the most dangerous animals in the world as they are highly aggressive and big.  Mostly when we saw them, they were lethargic and sunbathing – lucky for us.

Pumba is not as friendly as Disney makes him out to be – warthogs can injure much larger predators with their tusks.

Kudus are a woodland antelope with the ability to jump extreme heights – as high as 3.5 meters.

There are over 10,000 white rhinoceroses in Kruger National Park.  In fact, Richard and Thomas were so blase about seeing rhinos that the only times we saw them were running back and forth between other more interesting things.  It became a running joke; “oh, look a rhino. And….we’re gone.”

Blue wildebeests have a bridled coat, making them surprisingly beautiful despite their odd-shaped heads.

We saw so many African elephants while on safari in Kruger Park.  I will never forget the experience of having drinks and hors d’oeuvres at the side of a pond while a female and calf played across from us at sunset.

These zebras are the only species that can be farmed for their meat.

The cape buffalo seemed to be fairly stoic creatures – uninterested in us passing by.  We did find a buffalo skull, which Richard picked up and showed us where parasites had bored holes in the horns.

The most common animal in Kruger Park.

There were monkeys everywhere, including getting into our tents while we were gone during the day.

The black-backed jackal is one of the oldest canid species in the world.  Scientists think that not much has changed since the Pleistocene.

What Didn’t We See?

Our Kruger safari at Honeyguide was such an amazing experience. 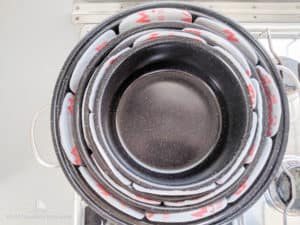 Magma Products Nesting Pots and Pans Review
We use cookies to ensure that we give you the best experience on our website. If you continue to use this site we will assume that you are happy with it.OkPrivacy policy