After a leisurely time in Walir, we made our way over to Banda Neira, the second stop for the rally. We’d spent so long in Walir that most of the rally boats had left. That was just fine with us.

Slow Flight was still in Banda Neira and they greeted us and helped us tie up to the dock. This is the first time since Antigua (in Dec 2015) that we med moored. Instead of tying right up to the dock, though, we tied up to the trees on shore in front of the Maulana Hotel.  There’s a set of stairs down into the water, which is shallow right by the wall but slopes down quickly.  We dropped our anchor in about 60 feet of water.  Unfortunately, we visited at spring tide, and the tide was VERY low some nights.

Our three buddy boats together in Banda.

There are ten islands in the Banda group, and they are known as the Spice Islands.  Once, they were the only place in the world where you could find nutmeg and mace (which are from the same tree).  The Dutch controlled Banda for a majority of its history, creating a monopoly on the spices from the islands that were sold throughout the world.  British forces took over Banda in 1810, and though they eventually gave the land back to the Dutch, it was really too late – the British had transplanted some nutmeg trees elsewhere, making the Banda Islands less valuable.

I ran (over many hills) to Maloli Beach.

There are a lot of good-looking cows on Banda.

The view of the Harbour.

With Trevor and Kimi from Slow Flight and Carlos from Mirniy Okean, we hired Eddie to take us out diving.  The weather was a bit choppy, so he picked two dive sites close into these islands.  The first dive site, Banda Blonda, was a wall dive with tons of sponges, including giant barrel sponges and feather stars.  My favorite spot was a devil ray, our first time to see one!  The second location was called the Lava Flow.  In 1988, the Gunung Api volcano on Api island erupted, and today we can see hardened lava flows on either side of the volcano. This dive is where the lava flow reaches the sea, and we could see the new rocks formed.

All kinds of interesting sponges.

Checking out the feather stars,

We had three wonderful and super cheap meals dining out in Banda.

Just off our dock is the Maulana Hotel, where we stopped for a meal one night.  Slow Flight said many of the rally boats had dinner or drinks here, and it got quite a lot of business.  We had dinner with Slow Flight at the hotel, and David had nasi goreng while I had ayam satay.  Total for two meals and two juices:  $11.32 USD.

This estate is owned by Abba, who is very welcoming to cruisers.  Abba can arrange activities and dives, and the Cilu Bintang hosts cooking classes and dinners.  While we didn’t have enough people interested in a cooking class (Slow Flight had already done one), we did get to participate in a buffet dinner.  With Mirniy and Slow Flight, plus the Australian couple staying at Maulana (the only people in the hotel), we enjoyed drinks on the balcony overlooking the fort and volcano before dinner was served.

Dinner was about a dozen dishes, mostly Javanese influence (Abba’s wife, the chef, is from Java).  While Abba explained the dishes to us, I wasn’t able to really note down what they all were, but most of the dishes were pescatarian;  whole grilled trevally, tuna wrapped in bok choy, eggplants with almond sauce (my favorite), several dishes with tempeh and tofu, and several dishes with what Abba called snails (some kind of mollusk).  For dessert, we had bala jus (nutmeg juice).  Total for two meals and two juices:  $20.71 USD.

While the buffet dinner at Cilu Bintang was fabulous, it wasn’t typical Indonesian food, but more fancy specialties.  Our best meal was at Delfika Cafe.  David ordered nasi goreng again and I had mie goreng ayam, fried noodles with chicken.  We also each had juice, which was very good (better than either of the other places).  Linda let me try her avocado juice, and Carlos shared his french fries (shockingly good) and Indonesian pancakes with nutmeg jam.  Total for two meals and two juices:  $8.71 USD.

With Carlos and Linda from Mirniy Okean we hired Bakri to take us on a tour of the spice plantations on Banda Besar, the largest island in the group.  The island produces nutmeg and mace, plus cloves and almonds.

First, you board a boat. Your driver might be Carlos.

Each of the villages has a canoe. They race every year in November.

Whale shark mascot on the canoe.

Many colorful steps up to the gardens.

Fish drying in the village.

Cloves after being dried for 4 days.

A nutmeg and two almonds. The black pit is the nutmeg spice, while the red lace around it is mace. The black almond is ready to eat.

How to Get to Banda

Getting to Banda is no easy feat. While there is an airport, flights are tricky and can not be booked online.  The landlubber tourists we talked to had booked through the hotel.

The other option is to travel via Pelni, the government-run passenger/cargo ship.  For more information, check out Traveling by Pelni by Shorts Trip.

We visited Banda Neira as a stop during the Wonderful Sail 2 Indonesia Rally, a three-month expedition of forty-four sailboats across Indonesia.

Read some of our friends’ experiences in Banda:

Our next stop in Indonesia is Wakatobi, a national park full of marine life and excellent diving.

Watch the Video: History Lessons and World Class Diving in the Spice Islands 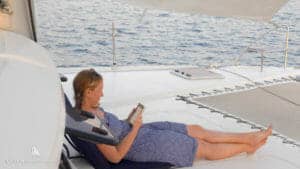 How to Read Hundreds of Books While Traveling (Mostly Free)
We use cookies to ensure that we give you the best experience on our website. If you continue to use this site we will assume that you are happy with it.OkPrivacy policy