Departing the Boat Works was only the second time EVER that one of us moved the boat without the other.  I was still at the WWSA Gathering on the Bay.  David invited our friends Mark and Susan to join him while launching the boat and motoring back to their dock.  We identified a few problems in the new system set up, so David and I spent a few days at their dock working on projects and recommissioned the boat for cruising again.  Problems continued to plague us, so every time we went to a marina, we also had parts waiting for us and projects to work on.  We will write about those projects soon, when we are 100% sure they are done, but in the meantime we were glad to get out and go cruising in Moreton Bay.

We left Paradise Point at high tide on April 12th, 2018.  Turning north, we took the channel between Coomera Island and South Stradbroke. We turned west after Woogoompah Island to pass through Jacobs Well and Horizon Shores Marina.

After Horizon Shores Marina it’s officially a “main channel”.  There are power lines that we passed under at Rocky Point.  The Beacon to Beacon guide says it’s got a clearance of 20.2 meters – 65 feet.  We passed under at mid-tide and our mast is about 74 feet.  Friends of ours on 55- and 60-foot cats have gone under just fine.

Our first stop in Moreton Bay was Coochiemudlo Island.  This island has a regular ferry with a ferry dock. There are many adorable houses and a convenience store with basic provisions.  At the north side of the ferry dock is a ladder which we used to tie up Little Dipper to explore.  One morning I walked the entire path around Coochiemudlo, which is mostly forest or suburban roads.

How does this even happen???

We came into RQYS to store Starry Horizons while we met Madeline in Brisbane and spent three nights there.  The marina is pretty big, and it’s about a 20-minute walk to the grocery store.

Not the St Helena Island.  This St Helena is just a short sail away from the mouth of the Brisbane River, and was our first stop with Madeline.  The island was a high-security prison from 1867 – 1932.  Now, it’s a historical attraction.  Madeline and I went ashore to walk around and check things out.  You can’t walk the whole island unguided, but there’s enough to see without a guide.  We stopped to check out the lime kiln operated by prisoners.  There is a graveyard for wardens and their families.  It took us a while until we spotted our first kangaroo, but once we knew to look for them we saw them everywhere!  They liked to watch us from the tall grass, their ears just barely visible if you know what to look for.

If you zoom in you might notice a few (or a dozen) kangaroo ears.

Tangalooma is a resort on Moreton Island.  We anchored in three different spots around the resort but there’s just no way to get away from the Tangalooma Roll – the swell that comes up from the south.

I booked a free day pass to the resort and Madeline and I went ashore to poke around.  The day pass gets us beach access (a hot topic in the news lately) and access to the hotel grounds – pool, restaurant, and education center.  The education center is mostly targeted for kids, but they do have a collection of wildlife artifacts, like turtle skeletons and shells.  The resort is famous for the dolphins that come every night to be hand fed.  We didn’t stay for the dolphin show, but the education center had a fact sheet on all the identified dolphins.  It was really interesting to read about the identities and personalities of each dolphin.

You don’t have to get a day pass to explore Tangalooma’s biggest underwater attraction.  In 1963, fifteen ships were sunk just off the shore to create a breakwater for small boats.  It’s a tight fit for the average cruising boat, but we made it work.  We donned our snorkel gear and hopped in Little Dipper.  The current is pretty strong, so David and I took turns as the support boat while snorkeling.

Later, the wind died down and Madeline and I took our new paddleboards out for a test spin.  Mad did great for her first time on a paddleboard!

Paddleboarding in the Tangalooma Wrecks.

Testing out my new Drift Paddleboard at the Tangalooma Wrecks.

Pulling up behind Starry Horizons.

Madeline and I paddleboarding at Tangalooma Wrecks.

A slip was reserved for us at Scarborough Marina.  We said goodbye to Madeline, and the next day David and I packed ourselves up and flew back home to the states for a short visit.

Scarborough Marina is nice, but far from a grocery store.  There is a convenience store in Scarborough off of the main beach, which I walked to, but it wasn’t enough for a really good provisioning run.  Thankfully for us, our neighbors just a few boats down the dock are fans of our videos, so they helped us out with a lift to the store.

Redcliffe is really the bigger town (compared to Scarborough) so one day I walked around a bit, and to my surprise, I stumbled upon Bee Gee Way.  Everyone knows the Bee Gees (staying aliiiiiiiiiive) but I had no idea they grew up in Australia, let alone the Redcliffe area.  Bee Gee Way was a timeline of their careers, complete with music and artwork dedicated to the brothers.

We are working our way up the Eastern seaboard of Australia.  Our next stop after leaving Moreton Bay is Mooloolaba.

Watch the Video: Up the Inside Passage to Moreton Bay 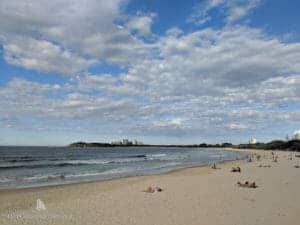 Sunshine Coast
We use cookies to ensure that we give you the best experience on our website. If you continue to use this site we will assume that you are happy with it.OkPrivacy policy