5 Nights in the Red Centre

My body sways with the bus, which bumps along the road in the dark.  It’s very early, and pitch black outside in Australia’s Red Centre.  I’m not the least bit tempted to sleep, though.  Out the window to my right shines the milky way, easily visible despite the headlights of the bus.  On my left is Uluru, a massive rock formation in the middle of the Australian Outback.  We have big plans for the day.

Uluru from the plane.

We’d arrived the day before flying in from Sydney, after our Bondi surf lessons.

Watch the Sun Rise Over Uluru

We woke up at 4:15 in the morning to catch a ride on the Uluru Hop On Hop Off bus.  They’ve only got one early morning pickup, so if you want to get an early morning start before it heats up too much, you’ve got to be up early.  The other option is to rent a car and drive yourself to Uluru, but car rentals are expensive here, so the Hop On Hop Off is more cost effective.

Pro tip:  Very little is open this early in the morning, so buy breakfast in advance at the IGA in the resort “town”.

Pro tip:  The Hop On Hop Off price does not include the parks fee, $25 per person.

The biggest negative about watching the sunrise over Uluru is the crowds of people.  When we arrived at Uluru, there was a bit of glowing sunrise on the horizon, and we were one of the first buses there.  By sunrise, the viewing platform had about 50 people on it.  There was a lot of selfies with the iPads (why???) and flash photography (I think I’m starting to be a bitter photographer).

But the sunrise was gorgeous and worth the crowds.

Base Walk Around Uluru

After sunrise, our shuttle driver asked us where we wanted to go next.  Most people on the bus wanted to go to the Mala Carpark.  This is where the Uluru climb takes place.  We have no interest in climbing Uluru.  In fact, it will soon be illegal.  Uluru is a sacred place for the aboriginal people, and they ask that you not climb it.  Uluru is often closed due to high winds anyway.  The Mala Carpark is also near caves and the Kantu Gorge, so it’s an easy walk for most people who want to see something interesting.

Instead of climbing Uluru, David and I walked the flat 10.6 km loop around the base of Uluru.  The national park actually closes completely if it gets too hot, so be sure to check the times and temperature before you start off.  Our shuttle driver warned us – no one died from snake bites in 2017, but five people died from dehydration.

Walking next to Uluru is surreal.  The land is so arid, and so dry.  We were fortunate that it was windy, so the breeze kept us cool and helped control the flies.  The rock itself is so red, while the sky is a bright blue.  Where the sky and rock meet is actually a little hard to look at.

These swallows were clinging to the rock wall. Are they feeding? Do they have a nest?

What do you see in the rock? I see a turtle!

This is one of my favorite memories from my Australia trip 10 years ago, and it was exactly what I remember.  Buses took us out to a hilltop in the outback.  Servers offered canapés with champagne while we watched the sun set and the light play over Uluru.  A buffet dinner was served, and we sat at banquet tables with other guests, socializing.  After dinner, the staff turned off the lights and an astronomer used a laser to point out some constellations to us and tell us Aboriginal lore around the constellations.  Afterwards, he had a telescope set up for us to view a few nebulae.  The whole experience was pretty dang magical.

Photographing Uluru and the Milky Way

After returning to our hotel, I walked out to the Uluru viewing platform and got some shots of the Milky Way over Uluru.  Also visible is airglow.

The red and green bands in the sky are airglow (a faint emission of light by the atmosphere).

After an early morning and a late night the day before, David and I got a late start.  We picked up our rental car and made the drive out to Kings Canyon.  There’s very little along the way, but we did stop at Mount Conner.  It looks kind of like Navajo National Monument in the states.

Stopping in King’s Canyon adds about 340 km to the 440 km drive between Uluru and Alice Springs in the Red Centre, but it is SO worth it!  The hike starts with an extremely steep climb, but continues along the rim of the canyon.  The rock formations are stunning, with these “bee hive” shapes that have been worn by wind.  We did all the side paths, which weren’t much.  The rim walk itself is 6 km.

Before hiking King’s Canyon we FINALLY bought some of the fly masks.  SO worth it.

The start of the King’s Canyon walk – up the stairs.

The canyon walls are more worn on one side.

Again, do this hike early in the day, because they will close the hike if it gets too warm out.

There’s not a whole lot to do on this drive, unless you want to stop at the gas station-cum-emu farm.

Our friend Paul picked us up from Alice Springs and took us for a drive out around West MacDonnell National Park.  Paul works for the government as an environmentalist, so it was like having our own private tour guide!

The MacDonnell range a huge spine along the Red Centre.  There are, however, certain spots where water has eroded a gap away over time.  These gaps in the range serve as watering holes, and are packed with vegetation compared to the rest of the outback.

Hermannsburg, the historic site of a Lutheran mission in the outback.  There is a museum here along with many original buildings.

Why so many miles?

The more direct routes (specifically the Mereenie pass between King’s Canyon and Hermannsburg) are unsealed, and must be taken with a four wheel drive vehicle.  As such, they are considerably slower than taking the long but paved road around.

Where to Stay in the Red Centre

The Red Centre lacks accommodation options.  And they are expensive to book, so we stayed at some of the cheaper options and toughed it out in some outdated or dingy places (at least when compared to our lovely AirBNBs elsewhere).

Ayer’s Rock Resort is basically a monopoly on the area around Uluru.  There are several accommodation levels, and we went with the Outback Pioneer Hotel, the least expensive accommodations you can get without giving up a private bathroom.

Kings Canyon Resort is also pretty much a monopoly.  This time we did give up our private bathroom.  However, the staff very kindly let us hold on to our towels after checking out at 6 am so that we could come back after our hike to shower.

There are much more options in Alice Springs, so we were able to stay at a cheaper hotel, The Aurora Alice Springs.  If you book far enough in advance, there are some nice AirBNBs available in the area.

Your 6th Night in the Red Centre

Use an extra day to go hike Kata-Tjuta.  Rumor says it’s better than the Uluru base walk.  If we ever make it back to the Red Centre, that’s priority number one!

Watch the Video: We’re Wilderness Explorers in the Australian Outback 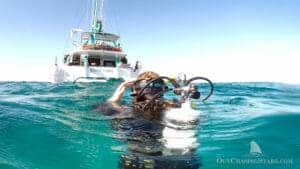 Ningaloo Reef – Under the Water with Sail Ningaloo
We use cookies to ensure that we give you the best experience on our website. If you continue to use this site we will assume that you are happy with it.OkPrivacy policy