Sailing from Portland to San Francisco

We flew back to the states for our first paid crewing gig on a sailboat – we’ve been hired to help the owners of another FP Helia from Portland, Oregon to Hawaii.

After spending some time in Seattle with David’s grandmother and then at an Airbnb in Portland with David’s parents, we arrived to Salpare Bay Marina Monday morning with David’s parents and got a chance to show them around Julia before they took off to the airport. Tom and Susan were not onboard but they’d left us a note welcoming us and telling us to make ourselves at home.

In fact, the first two days we barely saw T&S, as they were still wrapping up their land life. We poked around Julia and David and I checked out all the cool differences between our Helia and the Helia Evolution. We also had a special visitor on the dock – what I think is a Stellar Sea Lion!  They are pretty uncommon here in the marina, so people were amazed to hear about him.

We thought S&T were well stocked and moved in, but then on Wednesday, the movers came!  We had not expected to help out with moving onboard, but hey, we were there to help!  We did as much as we felt comfortable doing.

We have also really enjoyed the marina – the view on a clear day was fantastic and the Harbormaster, Ariel, was really helpful.  There’s even a nice restaurant called 3 Sheets that S&T took us out to.

S&T readily admitted they had too much stuff, and they were AMAZINGLY receptive to our advice on what they should keep on the boat and what they should put in storage. It felt a bit weird to unpack the galley and put someone else’s things aside. I sent back four boxes of stuff and S&T were totally receptive.

They’ve had Julia since August, but have been using the boat for entertaining and day sails more than cruising. It was interesting for us to see this moving on process. When we moved aboard Starry Horizons, we knew our space was limited to our small shipping box, four checked bags, and then one car load of stuff when we packed up our home.  It was not a short drive in a car to bring stuff to Starry Horizons!

S&T listened intently when I talked about what was worth keeping and what wasn’t. A lot of people are surprised to hear about mold; any clothes or even shoes that you don’t wear on a regular basis will mold. Table linens are too much of a hassle to wash regularly. Cruisers bring their own beverages to sundowners, so one set of glasses is enough. Dinner plates replace serving platters and paper towels replace napkins. Stuff like that.  S&T were so receptive to my advice which was a relief.  David took on some projects to get Julia ready to move, helping out with some plumbing and rigging projects.

Thursday night S&T finally spent their first night on Julia!  I may not have mentioned this before, but they’ve paid extra for me to be chef and steward – I”m doing all our provisioning and meal planning.  When they arrived, I had the cockpit set up for dinner with appetizers and wine ready to go. They also brought our fifth crew member on for us to finally meet – Jack, a chihuahua!

Departure Down the Columbia River

Friday morning we woke up at four am and departed Salpare. We had to get two bridges to open up, I-5 and a railroad. Then it was about 12 hours of motoring downriver. The current pushed us along and it rained a little bit.

The bar crossing was rough. Even though we were going through at the recommended time (flood tide), the waves were big and choppy, and the crossing lasted for hours!! We settled on grazing for food and lots of napping. David doesn’t suffer from seasickness at all, so he was a trooper for the rest of us.

We all took our watches through the night. Tom was from 6 pm to 9 pm, I was from 9 pm to midnight, Susan was midnight to 3 am, and David was 3 am to 6 am. Then rinse and repeat.

David and I were looking at our charts and realized that crossing the Columbia bar is the furthest north we’ve ever sailed – further north than Baddeck or La Rochelle. And, therefore, the COLDEST!  Thankfully Susan had heated blankets on our bed. I think I would have been miserable without the blankets.

It took about 38 hours for us to get to Coos Bay, Oregon. We actually weren’t in Coos Bay really, we were in Charleston, just inside the bar. This bar crossing was much easier – it was calmer and a much shorter distance. Charleston is a tiny little town, with some local grocery stores and restaurants. Although it was a bit of a walk, it’s doable. I walked for laundry and groceries and we went out to dinner at The Portside. Susan and I both went into Coos Bay proper for bigger errands.

Then our window opened up Tuesday to get down to the San Francisco Bay so we took off midday.

The passage from Coos Bay to San Fransisco

We are currently southbound along the coast of California in s/v Julia, trying to make our way to San Francisco. This leg started out quite well with good conditions to cross the Coos Bay bar. Although when we left, we did so knowing that the forecasts were calling for about 14 hours of southerly wind from Wednesday night to Thursday morning.

The plan was to start out fairly far offshore where the winds were good and then as the winds started shifting south, shift with them to come back in closer to shore. Closer in, the southerly winds were forecasted to be 6-8 knots rather than the 12-15 offshore. The plan got off to a good start as we were able to sail at a pretty good clip and then when the winds started shifting, we made our way to the forecasted light spot.

Only the forecasted light winds weren’t there. Instead, we’ve found winds in the 22-26knot TWS range with apparent winds up over 30 at times. This has kicked up some pretty decent wind waves with a very short period and is making things quite uncomfortable. I’ve seen GRIB files be wrong by 5 – 10 knots before, but I’m not sure I’ve ever seen a 20-knot difference between a forecast and actual conditions.

It just goes to show that you have to be ready for anything and that yes, the Pacific can definitely be a harsh mistress.

Arriving under the Golden Gate Bridge!

Friday morning David woke me at about 6 am. We had just a few miles to go before the Golden Gate Bridge!  Everyone was up on deck, and the current was strong – 4 knots!  We were navigating right down the middle, with surprisingly no traffic.

What a thrill to go under the bridge! Motoring past the San Francisco waterfront, Alcatraz, and Treasure Island we tucked into Oakland and the Jack London Square Marina.

We docked at the Jack London Marina in Oakland Friday morning. The body of water we are on, the Oakland Harbor, is very industrial. We were at the most north-eastern dock of Jack London, which is a sectional marina that goes for almost 2 miles. Just next door is the Ferry Terminal (very convenient) and beyond that is the Port of Oakland, which is always busy loading and unloading container ships.

Jack London Square is the section of Oakland, and it is a well developed, high-end area. There are many great restaurants and boutique shops. Across the Oakland Harbor is Alameda, and docked on that side of the river are the Commodore dinner cruise ships. I’m having flashbacks!

Most of the boats here are quiet, but there are about three or four with active people onboard. Two of the boats directly across from us are our age, and one of the guys even went to Plano East (David’s high school) although they were 5 years apart.

Saturday morning was the once a month Jack of All Trades Market, and the streets were lined with tents selling all kinds of products. Sunday was the weekly farmer’s market, and man it’s good to be in California in spring! I bought local asparagus, sugar snap peas, raspberries, strawberries, eggs, and more. Everything was delicious.

Sunday we woke up to head over to Seachelle, a Lagoon 400 a few dock clusters over and had breakfast with Michelle and Alex, who have been following our blog. Always fun to tour and chat with like people. We had a particularly fun time playing with their black lab Apollo, and talking about their spinnaker set up – they gibe their spinnaker! Considering we can’t seem to sail without ripping ours, that’s expert level.

Next, we met Sarah and Kevin who were brought to Julia by Don, Susan and Tom’s broker. Sarah and Kevin have also been following our adventures online. They are shopping for catamarans and looking to take off someday with their now-four-month-old son, Dylan. Dylan could totally pass for my kid with his red hair and blue eyes!

That evening, we had a last-minute-notice happy hour met up. Michelle and Alex came, as did Sarah, Dylan, and Kevin. We were also joined by Ron and Vivian, and Cyrille, Catherine, and their daughter (whose name I am blanking on). Everyone was super friendly and it was so nice to chat with them, and it’s fun to see the people who come to meet us become friends with each other!

Lest it sounds like we are having too much fun, we have been super productive here. We finally got Julia’s AIS to transmit, we got their Iridium Go set up, and their InReach (so Julia can now be tracked HERE). We’ve done lots of reorganizing and provisioning. In fact, we were so productive, David and I got to take a day off and spend one day in San Francisco proper!

Back on Julia after our one day in San Francisco, we identified our weather window for Saturday. That gave us a few more days to get projects done and also gave us a few “lesson” days. One day David sat down and taught S&T how to download weather and plan routes. Thursday we all went out sailing in San Francisco Bay and practiced raising and lowering the main, and then receding. David and I even learned quite a bit – Julia does not have single line reefing and we were able to successfully reef downwind for the first time!

Watch the Video:  Sailing S/V Julia Across the Pacific: Part 1 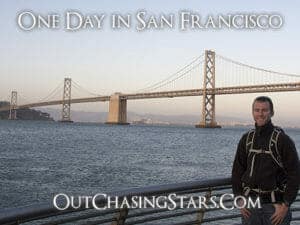 One Day in San Francisco
We use cookies to ensure that we give you the best experience on our website. If you continue to use this site we will assume that you are happy with it.OkPrivacy policy