We spent three nights sailing down to Whangarei, which is about 26 miles as the crow flies away from Opua, but because both towns are way up their respective bodies of water, we actually went 85 miles around.

The forecast for the next few days was dead calm, which is perfect as this trip is completely open to the elements – it’s a passage down the east coast of New Zealand. Some of our friends sailed overnight down to Whangarei, while others took one night, but it is definitely possible to take many more. There are several anchorages along the coast, but many of them are open to the ocean. The weather meant that not only did we have a calm trip, but we were able to pick bays that were easy to duck into and fairly unprotected instead of deep, protected bays inland.

As we left Opua, we were hailed by Quixotic, who was out sailing with their guests. We waved at each other and said goodbye in the VHF. They are staying in Opua and we will undoubtedly see them again before we leave NZ.

We headed north, coming around the point of Cape Brett, passing between Cape Brett and the Hole in the Rock – an island off the cape with caves, a rather large tourist attraction. We saw several boats with tours and even a helicopter flying by. Our angle wasn’t good enough to check out the actual “hole”, but the island and cape are beautiful.

We turned south, heading to our first stop – Bland Bay. Bland Bay is large, and although we shared it with two other boats, those boats were huddled into the windward side, while we plopped anchor right in the middle in about 20 feet of water. Holding was excellent. This bay was recommended by Kyle and Shelley on Blowin Bubbles – thanks ya’ll!

There is very little in Bland Bay. There are buildings and people on the beach, but it’s pretty quiet.

The next morning (Friday) we took off for the town of Tutukaka. We loved this stop!  Tutukaka is a small hidden gem on the coast, a quaint little town. Coming down the coast, we passed Poor Knights Islands and Nature Reserve, the site of hopefully some future diving for us. Coming in, the pass is small, allowing some protection from the sea. The large bulb of the bay has mooring balls with small boats tied up. We anchored just in front of the moorings, technically in Kowharewa Bay, I think.

There is a small marina – small enough I’m not sure Starry Horizons would fit. There is also a boat ramp and fuel dock.

Saturday morning there was a large event going on onshore – an outrigger regatta. All morning we got to watch outriggers line up at the far side of the bay, behind us, and race towards the beach. At one point, the 16 outriggers lined up were all-women 6 person teams! David re-bedded our aft head hatch for the project of the day. This one had been re-bedded back in Palmetto and had started leaking on our passage from Fiji. No fun for David!

We made up for the no fun in the afternoon though. We went ashore and tied LD up to the dock by the boat ramp. Directly across the street is the Oceans complex, a multipurpose building, housing shops, a hotel, apartments, and offices. There were a few boutique stores we popped into, the first one had local maps for free and the woman at the counter walked us through what there is to see on the hikes. We kept meandering the complex, eyeing the ice cream shop for later.

We followed the directions to the Tutukaka Head Lighthouse Walkway, a fantastic one hour hike. This hike should be done at low tide, as the land between the islands is exposed. During low tide, the combination of the cliffs and beaches provide guests with secluded beaches and beautiful views. But the real gem was at the top of the hike, looking down from the lighthouse over Tutukaka and its bays to the left and Rocky Bay to the right.

After the hike, we got ice cream at Lickity Split, a cute little shop, and got another lesson in Kiwisms. What we would call an ice cream float in the States – soda and ice cream – is called an ice cream soda here. The counter girl said they are not really popular though, and root beer is not too common here (maybe explains why the floats are popular). I did order one, Charlie’s honest raspberry soda vanilla ice cream. Delicious!

We did stop at the general store to pick up a few things, and the store was pretty well stocked.

Sunday morning we took off for our final leg into Whangarei. The highlight of the trip?  PENGUINS!! Twice we came upon a small flock of birds sitting in the water, and instead of flying off, we watched them dive and flap their little penguin wings. Super cute!

The town of Whangarei is pretty far upriver, and once you pass the commercial port at the very beginning, the river is shallow – 5 to 8 feet deep! We were thinking skinny thoughts the whole way up.

There is a bascule bridge which opens on demand. It’s a very unique design, and it was fun to go under.

Once we got to the town basin, Kyle and Shelley were there to grab our lines and get us on the T-head. Touchdown, Whangarei!

Watch the Video:  Heading to Whangerei for a Haul Out 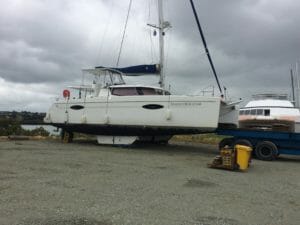 Haul Out at Norsand Boatyard in Whangarei
We use cookies to ensure that we give you the best experience on our website. If you continue to use this site we will assume that you are happy with it.OkPrivacy policy