Musket Cove draws the sailing crowd in, but it’s also one of the nicer local resorts in Fiji. Set away from the main island, Musket Cove has old plantation charm.

The most popular stop in the Mamanuca Islands, Malolo Lailai is just 20 km west of Nadi.  It’s a haven for cruising boats, and being just a day-sail away from the western side of Viti Levu means that you can relax in Malolo while waiting for a weather window to clear out.

The approach is marked well on charts and has channel markers.

We only have experience around Musket Cove.

The bay in front of Musket Cove is pretty deep – 60 feet – so much of it is taken up with mooring balls.  There are also some very large bommies to avoid, but they are very visible during the day.  Moorings were $18 FJD when we visited.

Paying for the mooring gets you access to the grounds, which includes a small grocery store called Trader’s and a lovely swimming pool.

Our second season in Fiji, we arrived into Musket Cove just in time for the Musket Cove Regatta.  A friend of ours had entered his boat (another Helia) and invited us to crew.

I opted to spent my birthday moored at Musket Cove.  A nice perk of spending an extra season in the South Pacific is how many of our friends from the last year are doing this too. With all these friends around, we had to throw a party!  Six other boats joined in (18 people) and everyone pitched in for a potluck.  We got to catch up with Carthago, Whistler, and Enough at the party, plus our newer friends on Qi, Sandy Cheeks, and Del Viento. 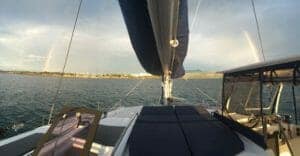 Fiji’s Vuda Point Marina
We use cookies to ensure that we give you the best experience on our website. If you continue to use this site we will assume that you are happy with it.OkPrivacy policy