Beveridge Reef was an interesting place for us to visit, and one that we’d been excited about for a while.  With every place, you have to take the good and the bad.

Where is Beveridge Reef?

Beveridge Reef is a submerged atoll 130 miles east of Niue and 600 miles west of the Cook Islands.  There’s no land, no houses, no people.  Just the wildlife, and a few intrepid yachties who make it out here.

Clearing Out in Bora Bora

We had cleared out of Bora Bora on Wednesday with the intention of leaving Thursday to take advantage of a weather window to sail to Niue. However, apparently clearing out of Bora Bora isn’t a one-stop-shop and required us to email copies of the stamped forms to an office in Tahiti who would then email us our final clearance document.

It can be difficult to comprehend sitting, as I imagine you are, behind a desk or using your phone with access to high-speed internet, just how frustrating a task sending a simple email can be. We sat for almost an hour and a half, with freshly bought groceries wilting in our bags, trying to upload 1 megabyte worth of documents. Yes, you read that right. One MEGABYTE!! Eventually, we ran out of daylight so we had to head back to Starry Horizons, cursing the internet gods.

Thursday morning, we came back in and got the email sent. But I was quite sure there would be no way we’d get the necessary email back in time for us to leave on Thursday and thus make the weather window. So instead, we decided to leave and head to another island close by called Maupiti, where there was supposedly wifi in the anchorage. There we could wait until we received the email and another weather window opened up.

Well… we sailed to Maupiti and just as we arrived the winds kicked up and there was a massive swell at the entrance to the pass. So big in fact, that neither of us felt comfortable trying to enter. We couldn’t sail back to Bora Bora, couldn’t enter Maupiti, so what could we do? Decide to just keep on going and take advantage of the original weather window.

So instead of Niue, we decided to stop at the small atoll called Beveridge Reef before the wind completely died.

Open up Google Maps ya’ll, you are going to want to see this.

Beveridge Reef is about 140 miles from Niue (an overnight sail for us). It is a small atoll 6 nm long by 2 nm wide that doesn’t even break the surface most of the time. If you didn’t know it was there, it would be hard to find during the day, and impossible to spot at night.

Fortunately for us, one boat was on AIS as we approached – Prince Diamond, who we haven’t met but have shared anchorages with before. We gave them a hail looking for advice, and they happily reported about the entrance to us.

The ocean swell was fairly big but with a large period between the waves, and the winds were less than 5 knots. Since we approached from the east, we went up and over the north of the atoll.  Our charts were laughably pathetic – since then Raymarine has updated the charts to more accurately reflect Beveridge Reef.  Our cruising guides (including the Soggy Paws Compendium) didn’t include a chart; they just had one coordinate and said that the entrance is on the west side.  I sent in submissions for future cruisers to have accurate information!

Price Diamond told us to come down to 20 degrees south and turn due east to find the pass. We stayed well off from the blob on our Raymarine chart, until we were ready to line up. The water in the pass was choppy with the breakers on either side of us. The current was fairly strong – 3 to 4 knots. The Niue tide station says low tide was at noon, high tide is at 6 pm, so we were probably pretty close to the middle.

Even approaching the atoll in thousands of feet of water, you could tell the water was unusually clear, as I watched the sunbeams shine into the deep. When it got to about 50 feet deep, David was on the deck helping me navigate through visually. We did a few zigs and zags, but nothing major.

Once the depth leveled out around 30 feet we turned north. There were only three boats here; us, Prince Diamond, and an FP Orana named Anahoa.

Anahoa was anchored just north of the pass, so we came past them and anchored about a quarter-mile away from them in 20 feet of water. As the tide rises we get less protection from the swell, so it is a little rocky out here.

The water is really crazy clear. I immediately got in to snorkel and check the height of the bommies around us. I didn’t even really need to snorkel….the visibility is at least 200 feet. Mac Daddy set perfectly and the bommies mostly just rise a few feet above the bottom.

I swam around a bit enjoying the exercise and cool water until I got approached by a shark. He was VERY curious and made me uncomfortable, especially because I didn’t know what kind he was – not the black-tipped reef sharks that we usually swim with. I tried to discourage him from getting closer, and eventually, he did leave me alone. Based on the notch in his tail and his colorings, I’d say he was a gray reef shark – the guide book says they are only occasionally aggressive…gee thanks. Fortunately, he was small.

The whole passage we kept a close eye out for whales because it is peak season. We didn’t see anything while out there, but just a few minutes after dropping the hook, David was washing dishes and he spotted a spout just outside the pass. They are sporadic but they are there!

Our Visit to Beveridge Reef

Thursday the two boats that were here left, so we had all of Beveridge Reef to ourselves. Unfortunately, the wind and swell picked up. The hazard of a place like this is that with no land, comes no protection from the swell and winds. This is not a calm anchorage. We are glad to be in a cat!  That being said, it is an absolutely beautiful location.

We spent the day doing some chores and cleaning. I baked bread and banana muffins while running several loads of laundry.

Friday morning our escape hatch was leaking. I only found this out when I noticed that the clothes in the laundry pile (under the machine) were soaking wet and some were even moldy. So that means I spent the morning doing more laundry!

We also had a new boat come in, a monohull named Viking. We hailed them, a bit worried about their path into the atoll.  They were worried about us since on the chart it looks like we are onshore. Again – horribly inaccurate charts. Both parties assured each other we were ok.  We gave them some tips for the pass and they anchored near us.

That afternoon David and I wanted to go for a snorkel. We’d heard about a wreck located near us, identifiable by being one of the only things sticking out of the water. We hopped in LD, rocking and rolling in the waves, and made our way over. We anchored and hopped in, finding some large reef fish and very unusual rock formations – we honestly aren’t sure if it was a wreck or just rocks.

However, about two minutes into our swim David yells and starts flailing in the water. I’m concerned and going to try to calm him down when I notice a flash of bright blue in the water – jellyfish. And then the jellyfish stung me. More flailing and then rushing back to the dinghy, and back to SH.

The biggest concern was that we didn’t see exactly what stung us, and the tropical Pacific is the home of box jellies, which can be deadly. If you get stung by one there’s not really much you can do about it in a remote situation like this. Box jellyfish don’t have a 100% kill rate– we know several people who have gotten stung and survived.

Back on SH the first thing we did was pour some white vinegar on the stings. White vinegar doesn’t help in all jellyfish stings, but it won’t hurt. Next, I did a hot shower off the back of the boat, and that’s what helped the most. I also popped some acetaminophen.

At first, the stings were white raised bumps that stung, and then turned into a large red rash that burned, and then that faded to small white bumps that look like bug bites. All of this occurred in about an hour’s time. We suspect that we were stung by a Portuguese man-o-war.

Between the sharks, the jellies, and the motion of the ocean, this may not be my favorite place ever.

A Gift From Viking

However, leave it to other cruisers to turn the day around. Vaughn, Scott, and Christina from Viking came over to say hello. After a bit of socializing, they left to go swim outside the reef. On their way back, they brought us a gift of a coral trout!  Scott filleted the fish for me. We gave them a few beers and chatted for a bit more about our boat and underwater photography.  They showed us the pictures they took with their DSLR and underwater housing of swimming with the whales – amazing!

Fresh caught fish for dinner – not too rough! I made beer battered fish with half of the fish and froze the other half. And DAMN it was really good fish.

The next day I had some muscle soreness in my back and glutes – from the stings or the flailing, I’m not sure. Viking left, giving us two nights alone in Beveridge Reef. We didn’t want to arrive in Niue on the weekend and we wanted to be able to sail the whole way as we are running low on diesel. That meant we kept delaying our departure, but we finally sucked it up and left this morning at 11 am. Exiting was easy.  We followed our trail out and only encountered 1 knot of current flowing with us. There were no whales outside the pass, unfortunately.

We should arrive in Niue by sundown on Tuesday (tomorrow). 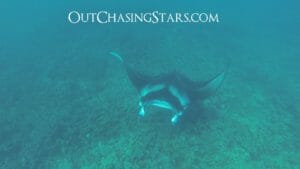 Top 10 Cruising Experiences in French Polynesia
We use cookies to ensure that we give you the best experience on our website. If you continue to use this site we will assume that you are happy with it.OkPrivacy policy