Bimini was the start, and one of the highlights, of our three-week adventure in the Bahamas aboard our boat, Starry Horizons.  One thing that made it so special was that my cousin Robert came to visit us!

The only airport in Bimini is the South Bimini Airport (BIM), which operates daily flights from Nassau or Florida.  Robert flew into BIM.

However, there is also a ferry running from Miami to Bimini operated by FRS Caribbean Ferries.

Where to Stay In Bimini

There’s only one hotel on the island of South Bimini, the Bimini Sands Resort and Marina.

How to Get Around in Bimini

Without a boat, it’s a lot harder to get out to some of the best spots in Bimini.  One company that offers tours for all the activities we did is Bimini Undersea.

Our plan was to pick up Robert at the Bimini Sands Beach Club.  An anchorage called Nixon’s Harbor is next to the marina. We anchored there and the winds and current were so light we just bobbed. The bottom was mostly seagrass and we were unhappy with how the anchor was holding.  We would move for the night later.

After a drink and some chat, Robert and I dinghied back to the boat. We snorkeled, checking out the seagrass bottom full of sand dollars, conch shells, and sea urchins before we picked up our anchor and moved.

We anchored to the north of the Bimini Road, which worked out really well with good holding.  After lunch, we hopped in the dingy with our snorkel gear and tied up to the mooring ball where we suspected the road was. Sure enough, we had the Bimini Road all to ourselves!

The road is a rock formation of unknown origin that consists of large, rectangular rocks laid out like a road. No one really knows how the road was formed, but it is generally thought to be a natural formation, not a road from an ancient civilization. Scientists have carbon dated the road to be over 3,500 years old.  The road is in about 20 feet of water, so it’s a bit difficult to get up close and personal with the fauna. We did see a wide variety of reef fish, sea fans, and even a cuttlefish.

We hopped back into the dingy and motored over to a mooring at the rock formation just north of the roads. The rocks form a reef, and there was much more to see here in terms of fish and coral. We saw more cuttlefish, a flounder, and a barracuda.

Back on the boat, we sat on the bow and played spot-the-sea-turtle. There were at least five, and the would poke their heads up for air and go back down. If we kept a close eye on them the water was so clear we could follow them as they swam. Robert had brought us polarized filters for our camera and batteries for our GoPro, so David had lots of toys to play with.

We needed a better anchorage for the night, so we moved south to Gun Cay.  The guidebook recommended an anchorage called Honeymoon Harbor. When we arrived it was pretty full, with about 15 boats. We anchored just on the other side of the reef on the west side and see how things shaped up.  One by one, boats left the harbor.  Just before sunset, there were only three boats left; another cat and two trawlers traveling together.

We upped anchor (with some difficulty as we were caught on a ledge) and moved to Honeymoon Harbor. The other cat was a Lagoon 44, and we counted 12 people aboard!  We weren’t sure if they were charter or not, but we were very judgmental about their anchor set up – they had a second anchor off their stern, with the boat rubbing on the chain!

We watched a gorgeous sunset and then the cat left, sailing into the night. Robert and I enjoyed stargazing for a bit and then we all hit the sack.

In the morning on Monday, I awoke to find us all alone in the harbor. We decided to take a lazy day and not move, so we sat in our cockpit and enjoyed our own books  – until David spotted dolphins!  We stood at the transom, watching them with the camera, until one by one we slipped into the water. There were six Atlantic Spotted Dolphins; 4 adults and two babies who hadn’t earned their spots yet. They circled us, getting within a few feet and giving us a show, nudging the babies and waving their flippers.

Robert spotted an eagle ray, and as our attention turned, the dolphins faded away – perhaps jealous?  The eagle ray had no interest in us and passed by quickly.

Stingrays on the Beach

In the early afternoon, while we were still the only boat here, Robert and I snorkeled into the beach. I’d read that there were stingrays in the harbor “looking for handouts”. Robert and I quickly learned the stingrays were the main attraction here!  As we swam, large stingrays circled us, getting very close, and often sneaking up to us. On the beach, smaller ones are even more friendly, swimming over our feet and bumping into us. Fishing boats that come into Honeymoon Harbor “chum” the water in the depths for the larger stingrays and people go ashore with fish scraps and hand-feed the smaller ones.  We did neither and were still quite the attraction for the stingrays. In fact, they really liked Robert!

David and I took a separate trip out and walked on the beach. This time, several other boats had joined us and were feeding the stingray.  Even with them drawing the stingrays away from us,  we did see a few. On our swim back we swam close to a fishing boat and they had all the stingrays around them – and even a small shark!  I actually didn’t see the shark, but David did.

As the boats left, we found ourselves sharing the harbor with one sailboat, enjoying the sunset!

Tuesday we departed our anchorage and headed to the Sapona wreck.  We were really hoping to snorkel it, but unfortunately, we couldn’t get our anchor to hold well in the hard-packed sand and seagrass combination.  We decided to just head east instead.  Hopefully, we will get to the Sapona wreck some other time we cruise the Bahamas!

Off to the Berry Islands!

Once Sapona Wreck proved to be a bust for us, we took off for an overnight sail to Hoffman’s Cay in the Berry Islands.

Watch the Video: Cruising the Bahamas 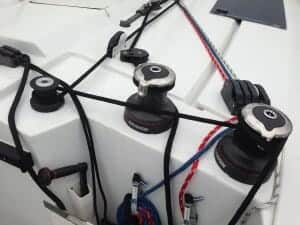 Outfitting Our Cruising Catamaran
We use cookies to ensure that we give you the best experience on our website. If you continue to use this site we will assume that you are happy with it.OkPrivacy policy