I’ll admit it, I’m a bit of a nerd.  I like technology and while I’m not the most technologically advanced person in my family (here’s looking at you o’ brother of mine…) I think I come in at a solid second place.  Therefore, the choice of electronics on our boat is a key concern of mine.  I want a system that will integrate seamlessly across the boat, beyond just your regular instruments, to include our laptops, media server, iPads and any other device we can think to add.  I know that this is a tall order and there will be pluses and minuses to any system we choose, but some will be better than others at accomplishing this goal.

Fountaine Pajot installs Garmin electronics as standard on their boats.  The vast majority of my experience on boats has been using Raymarine electronics, and since the display Helia actually had Raymarine installed, I asked our dealer if it was possible to elect for a different system than Garmin.  He assured me that it was, and thus my research began.

Garmin earns good marks throughout the web for their ease of use.  I have only limited experience using them, but the interface does appear pretty straightforward and user-friendly.  However… they come in dead last when it comes to integration with other systems.  Fountaine Pajot uses the Garmin 5008 and 5012 chartplotters on the Helia, which do not offer wifi, nor do they offer any wired connectivity outside of the “Garmin Marine Network”.

We stopped by the Garmin booth at the Annapolis Boat Show and were told that in order to transfer data (such as weather overlays, or routing information) from a computer, you had to use an SD card to save the data on the computer, and then manually transfer it over to the plotter.  Not exactly what we’re looking for, and in this day and age of connectivity, it’s pretty shockingly behind the times.

As mentioned, the vast majority of both the Admiral and my’s experience with marine electronics has been on Raymarine equipment.  That has created a familiarity which is a solid plus in Raymarine’s corner.  The eSeries HybridTouch Displays offers a good mix of basic touch features, as well as buttons that can be used to operate the system as well.  While you won’t mistake it for an iPad anytime soon, it does seem to be moving in the right direction.  They also have WiFi and Bluetooth connectivity, which can be used to connect to iPad’s and iPhones using Raymarine’s native apps or even the Navionics app.  The WiFi means that we could connect our laptop into the system and use the Raymarine Voyage Planner software to create waypoints, routes, and tracks on the laptop and then instantly send it to our multifunction display (MFD).

This is definitely more along the lines of what I’m looking for, but I have two reservations: 1) WiFi is great, but would seem more likely to fail at a critical moment than a wired connection to the computer and 2) the Voyage Planner software appears pretty basic, and doesn’t have some of the advanced features available with other software packages.

I was first turned on to Furuno when I read the great blog of s/v Field Trip and when Amy and I got the chance to randomly run into Mark and Sarah in St. Barts while we were on a charter, we got to see first hand how Mark had managed to integrate all electronics on his boat.  The new TZ Touch line of MFDs looks really nice, but also really pricey.  The NavNet 3D line of MFDs is what I have focused on as they have NMEA 0183 and 2000 capability, as well as Ethernet connectivity.  In truth, I like the Ethernet connectivity a bit better than WiFi as I believe it would offer a more consistent connection and be less likely to fail.  However, what really seems to set the Furuno system apart is its MaxSea software.

Using the optional Routing Module, I could plug in weather forecast and current data and the software will calculate the optimal sailing route based on the polars of our boat.  How cool is that!?  Now, I certainly recognize that conditions actually out on the water may not play out exactly as forecasted, and it is probable we won’t end up sailing the exact route calculated, but these are the sort of technological features that get me excited.

Unfortunately, Furuno is more expensive than either Garmin or Raymarine.

The biggest decision that Amy and I made at the Miami Boat Show was to stop pushing for Furuno electronics aboard Starry Horizons and instead move forward with installing Raymarine equipment on the boat.  There were several reasons for this decision, but we wouldn’t have made it had we not gotten an opportunity to chat with Raymarine at the show and get a chance to demo some of their newer options.  Three of our boats at Star Fleet have Raymarine on board, so that gave me a comfortable base to start from, but I was impressed with some of the latest advances.

By going with Raymarine, we’ll be able to install eSeries HybridTouch MFDs.  These utilize a new user interface called LightHouse II and are a far cry from the old cSeries that we’re used to using.  The menu setups are much more intuitive, allowing for significantly more options when it comes to setting up the home screen.  Interacting with charts was fairly quick, and could be done by touch or using the rotary controller and keypad.  Plus, Raymarine releases free updates that can be downloaded over the internet and uploaded to the MFD using a microSD card.  That will come in quite handy when we’re somewhere where we can download an update quickly, rather than waiting forever for a card to be shipped to us from the manufacturer.

So this is perhaps not the sexiest reason ever, but it was something I was pretty excited about.  I’m quite big into interconnectivity among our various systems, and one of the things I wanted to be able to do was plot out a route on a laptop, send it to our plotter and go.  MaxSea integrated seamlessly with Furuno and was one of the reasons I was so interested in going that route.  However, there is another chartplotter and navigation software package called OpenCPN that has been developed by active sailors and can be used for free.  I have only a little experience playing around with it, and while it’s not quite on the same level as MaxSea, it’s an impressive program.  And OpenCPN can save and load waypoints, tracks and layers using the GPX transfer format so we should be able to have a high level of interconnectivity with our Raymarine equipment, just like I wanted.

The eSeries MFDs have built-in WiFi, and while I will take some convincing that this will be a stable, reliable communication method, it does allow for some interesting possibilities.  Raymarine has developed an app called RayControl that allows you to take your iPad and turn it into a full-function MFD.  You can remotely control and view all the functions of the MFD including charts, radar, sonar and even adjust menus.  That is a pretty neat feature and essentially allow us to control our MFD from anywhere on the boat.

Raymarine has also worked with Navionics to integrate the Navionics Mobile App and allow for us to plan a trip on the Navionics App and then synchronize with the MFD wirelessly.  I’ve downloaded the Navionics App to play around with it, and it’s fairly straightforward and easy to use.  It is not feature-laden enough to qualify as an independent plotter, but it will provide yet another backup for us, which I greatly appreciate.

In the main salon we have:

This system is pretty well interconnected. The Vesper AIS shares information with our Raymarine plotter and the plotting program on the laptop.  The iPad can control the Raymarine equipment (using Raymarine apps) and we can use the Navionics app to easily plot a course and send it to the plotter.  We also use the iPad or our phones to monitor weather information (speed/angle/etc) while we’re inside.

One of the interesting things we learned during our Fountaine Pajot factory tour (and that sort of falls under electronics since it integrates with the autopilot) was that Fountaine Pajot modified the steering system on the Helia starting with hull 73 so that the boat now comes with a hydraulic system.  We were quite happy with that as some opinions we’d heard of the old system was less than favorable!

This system was installed by Uchimata in La Rochelle.

During our Bay of Biscay crossing, our Vesper AIS would occasionally lose it’s GPS fix due to lack of signal.  I have the neat Vesper Marine app on my iPhone which allows you to see the signal strength from the satellites in view.  Believing that the internal GPS on the Watchmate unit was too hidden inside the boat to have a clear view of the sky (signal would have to come down through the bimini, through our forward windows and down into the nav station housing), we wanted to install a dedicated antenna that would help boost the signal.

As it turns out, all that was needed was a simple external antenna that we’ve routed to be a bit more forward in the salon, which brings it out from under the bimini.  Signal strength improved significantly. 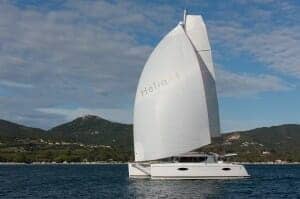 Headsails: Gennakers, Screechers and Reachers… Oh My!
We use cookies to ensure that we give you the best experience on our website. If you continue to use this site we will assume that you are happy with it.OkPrivacy policy