We’ve been cruising around Seychelles, checking out the islands while having two groups of friends visit: Vishnu, Frido, and the three-year-old Ranju; and Kyle and Lauren.  We’d already seen the coco de mer palm tree at Vallee de Mai in Praslin, and now it was time to see another endemic species:  the Aldabra giant tortoise.

There are only two locations in the world where there are any more giant tortoises; Seychelles and Galapagos.  It’s actually a very sad statement about humankind’s influence on nature; giant tortoises once roamed all over the world but were hunted to extinction.  Giant tortoises can float with their heads up and can go for six months without food or water, meaning it’s likely that giant tortoises spread around the world by oceanic dispersal.  Unfortunately, their ability to go without food for long periods of time meant they were taken on ships out to sea and kept for the sailors to ear, exterminating them in nearly worldwide.

When conservation effects were attempted, tortoises were only found in Seychelles in the Aldabra atoll, way to the south.  Tortoises were brought back up to the inner islands and repopulated.

David and I had already seen giant tortoises when we visited the Charles Darwin Research Station on Santa Cruz, Galapagos.

The island itself has an interesting history as well.  Originally it was simply used to extricate resources, like the tortoises and coco de mer trees.  This resulted in a fire that wiped out all the natural trees on the island and pretty well desiccated it.  In 1829 the island was set up as a leper colony, which was in operation until 1965.  Another fire in the 60s led to the government taking over, and from there conservation efforts took place.  The area around the island was declared a marine park, and the tortoises were reintroduced, as well as a breeding program developed.

We were visiting on our own boat, but most people do not visit that way.  Crewed charter boats and day-trippers from Praslin get dropped off in La Raie Bay on the east side.  Then, they take the walk around to Anse St Jose* where a bbq lunch and their boat awaits them!  We didn’t provide that kind of service for our friends (sucks for them) as we left Starry Horizons in La Raie and made the trek together.  While they didn’t get a bbq picnic lunch they got the delight of our company!

Upon arriving at the beach in La Raie, there’s a picnic table where a couple of guys take your money and give you a receipt.  The cost is 200 SCR per person, roughly $15 USD.

This is no petting zoo!  Just behind the bushes is a wide grassy area where the tortoises are roaming free (although if you look closely you’ll probably see some tortoises hiding in the bushes).  The tortoises usually are just sitting there like bumps on a log eating grass, but sometimes, if properly motivated, they lift their bodies clear off the ground and stride around standing tall…they look like dinosaurs!

Red fody birds running around with the tortoises.

Our first trip, the guy taking our money pointed to another local guy and said: “he’ll show you which leaves to pick”.  The official rule may be that you aren’t supposed to feed them, but it’s sure not being enforced.

There are a few buildings near the beach, and one is the tortoise nursery.  In there, baby tortoises are running around in little pens, and they are flippin adorable.

There’s a 2 km hike around the edge of the island to get from La Raie to Anse St Jose.  There are a few small hills to get over, but a majority of it is actually down in the mangroves.  An artificial breakwater protects the mangroves to make a shallow bay, inaccessible by boats.  At one point, a breeding program for sea turtles was attempted here, but for whatever reason, it was not successful.  However, baby lemon sharks come into the mangrove bay to grow and feed.  There are also TONS of crabs of all different varieties.

How many fiddler crabs can you spot?

A red, white, and blue crab! Spotted just after 4th of July.

Anse St Jose is the site of the former leper colony.  There are a lot of ruins, many of which are now being used for the volunteers from GVI.  And let me just say, the buildings the volunteers are living in are very….rustic.  However, the doctor’s house is now set up as a museum.  It gave a lot of the history of the island and a bit of information about the coco de mer that we hadn’t learned at Vallee de Mai.

On our second visit, we were surprised to see a tortoise hanging out just off the trail.  Most of the tortoises are around La Raie, and we hadn’t seen any on our first visit.  While we checked out the museum, the tortoise even made his way over to the picnic gazebo.

David and Ranju playing on the second floor of the doctor’s house. 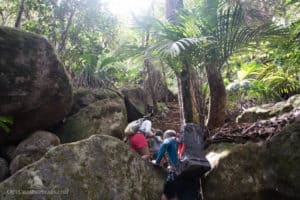 Hiking the Copolia Trail in Mahe, Seychelles
We use cookies to ensure that we give you the best experience on our website. If you continue to use this site we will assume that you are happy with it.OkPrivacy policy