After two months of cruising the Maldives, we made the short hop from Gan to the archipelago of Chagos.  We left Gan May 23rd, after waiting to fill our propane tank, which took nearly a week!  (We should have done it in Male).   After less than three days of very light winds and mostly motoring, we arrived into Chagos on May 26th.

There is no tourism in Chagos.  Sailboats stopping in on their way through the Indian Ocean are the only non-military people who are allowed to visit, and because of this, Chagos has a special place in cruising legend.

The Geography of Chagos

The Chagos archipelago is located almost due south from the Maldives.  It’s a collection of seven atolls around 6 degrees south of the equator.  The total land area is only 21.7 square miles, and the largest island is the highly controversial Diego Garcia.

The Controversy of Diego Garcia

The only current inhabitants of Chagos are on Diego Garcia, which houses a joint US/UK military base.  The original inhabitants of the islands – Chagossians – originally colonized in 1793 as slaves on coconut plantations.  In 1840, the slaves were granted their freedom, and they remained in the islands.

In 1965, the UK purchased the Chagos islands from Mauritius, and grouped it with a few other islands in the region to form the British Indian Ocean Territories.  This led to the removal of the peoples living there, most of whom relocated to Mauritius.  The UK made an agreement with the United States to host a military base in the islands for Indian Ocean defenses.

Recently, the Chagos islands have been in the news because the UN, through the ICJ and the General Assembly, has ruled that the UK needs to relinquish control of the islands back to the Chagossian people.  It will be really interesting to see what happens to the islands in the next year or so.

In advance of our arrival, we applied for the permit through the BIOT administration.

We were supposed to send a notice of our arrival into the economic zone of the BIOT, but we did not.  I did email a notice about an hour before we entered the Salomon atoll, and then again when we dropped anchor.

We didn’t expect there to be any other formalities involved.  However, one morning we woke up to find a large ship outside the atoll.  Assuming it was a commercial ship passing through, we went about our day.  We were on the island of Ile Fouquet, taking a walk, when military-grade tenders were deployed from the ship and came into the atoll and stopped at the cruising boats.  Quickly, we wrapped up our walk and came back to Starry Horizons.

We were boarded by two young men, from the UK, heavily tattooed and in military uniforms.  They took down our information, verified our permit, and – to our absolute pleasure – stamped our passports!  They were very polite, and we chatted with them about what life is like on the base.  I already knew from my parents’ maritime history that the BIOT postings were highly favorable, and the men confirmed it.  They even get to go scuba diving!  The government does not allow cruisers to dive because of the high risk and lack of emergency medical care.

We were delighted to find the best anchor spot in all of Chagos open for us to use.  Between Ile Fouquet and Ile Takamaka is a small and shallow sandbar.  It’s perfect enough for two catamarans, so we anchored next to our friends on China Dream.  Cruisers have designated anchoring areas, but looking at the satellite imagery, the area by Ile Fouquet and Ile Takamaka is the only sandy spot.  The rest appear to be coral.

Conditions were generally nice, but twice we swung completely around and faced westerly winds for the day, giving us a bumpy ride.

Fish and birds are plentiful around the anchorage.  We enjoyed watching the show as predators from above and below chase small fish.

The shallow spot we were anchored in didn’t have many sharks, but our neighbors had regular black-tipped shark visitors.  Also, just west of Ile Takamaka, there is a manta ray feeding station.  We did not get to enjoy it, but our neighbors swam with the manta rays frequently, especially in the late afternoon.

Ek! A portugese man-o-war (blue bottle) washed up onto the stern of Starry Horizons.

We were in good company in Chagos – there were four boats there when we arrived, and two others arrived during our stay.  One of the boats already there was Ostrika, whom we had met in Sri Lanka but missed for the entirety of our stay in the Maldives.  Another boat already there was China Dream, who we had not met in person but had talked to online.  Jackie and Sophia are the first Chinese (or even Asian) couple we’ve met while cruising.  Jackie was an Olympic sailor, and they both traveled the world.

The day before we left, our friends on Nauti Nauti arrived, after a big sail from Indonesia.  We had to leave them behind, and we were extra concerned – their SSB was not working, so they no longer had a way to communicate with the greater world.

Ile Boddam is clear across the atoll from our anchorage, about 4.25 miles by dinghy.  As with all the islands, it’s best to walk the beach at low tide – otherwise there’s not much beach.

The attraction for Ile Boddam is that this is the primary place that the Chagossian people lived.  There are still village ruins and paths through the jungle.  The BIOT administration has also regulated where cruisers can have a bonfire, and Ile Boddam is one of those locations.

The plaque reads (to the best of my knowledge): In Remembrance of our visit to the Chagos archipelago this April 2006 Boddam Salomon. Heartfelt thoughts to our beloved we have left behind here. In God we trust and hope. Chagossian Community.

A memorial to Chagossians.

Ruins of a building.

Coconut crabs – this was only one of two we saw and he didn’t have a shell.

However, we came unprepared to Ile Boddam, because we did not bring bugspray.  We were quickly chased out by mosquitoes.  So, DON’T FORGET YOUR BUGSPRAY.

Instead, we walked along the beach.  The north side of the island has a shallow bay, with gorgeous blue water where I went for a swim.

Fallen coconut trees are very common on the beach. Fun to climb on!

I love how the eye stalks stick out of the water!

Ghost crab in his home.

A stingray in the shallows.

This island, just south of our anchorage, is the site of a sailing wreck of the Black Rose, supposedly a charter catamaran that wrecked on the beach here.  She’s flagged in Port Vila, Vanuatu, so that’s a pretty long way from an unusual home.

Walking along the beach, we encountered all kinds of seabirds and crustaceans.  And the views – WOW!

Ref-footed boobies in the tree.

Takamaka ended up being our biggest excursion.  We came in at low tide and walked around the south side of the island, out to the easternmost point.  It’s a pretty big island, and the tide is only low enough for so long; as it was we had to scramble back through the jungle when we lost our beach. The beach itself is very chunky – instead of sand, the beach is made of small chunks of coral.  We wore sneakers on our adventure.  We really enjoyed the tide pools created from the rugged shore.   Eels come out of the water to chase around the wide variety of crabs that live in the rocks.

These crabs are extremely plentiful.

We watched this black-tipped reef shark chase something up into this shallow area.

These eels came WAY out of the water to chase the red crabs.

No idea what this is?

Red eyed crab. They have one huge claw, and look like a bulky boxer.

The blue spots are parrotfish swimming.

On this island, we got much more up close and personal with the red-footed boobies that nest in the trees.

David with some nesting boobies.

Adolescent in the nest.

We left Chagos on June 5th, bound for the Seychelles on what would become one of our hardest passages ever. 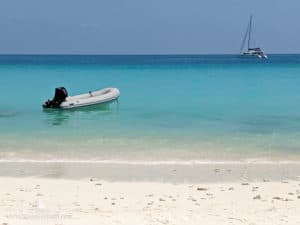 Eight Weeks Cruising the Maldives
We use cookies to ensure that we give you the best experience on our website. If you continue to use this site we will assume that you are happy with it.OkPrivacy policy