We frequently get asked about how insurance works out here.  How do we insure our boat? What restrictions do you have on your boat insurance? My boat insurance policy is going up 200%, help me!

When we moved aboard Starry Horizons, we wanted to sail the boat across the Atlantic with just the two of us. Most insurances were not willing to insure us for the Atlantic crossing.  We did a ton of research and eventually settled on Pantaenius.

It is important to note that we had thorough credentials for coastal sailing: USCG 100Ton Master’s licenses near coastal with a sailing endorsement, two bareboat Caribbean charters, and months of sailing experience on our 30′ catamaran.  However, insurances were interested to know if either of us had offshore sailing experience – which we didn’t.

Our dealer helped us find an insurance broker named Brown & Brown who shopped around for us and got a few quotes.  We honestly don’t remember how using a broker went.  It certainly expedited getting initial quotes from various companies, but we had specific questions regarding coverage and often ended up communicating directly with the insurance company.

With our credentials, Pantaenius was willing to cover us for the start of our voyage – crossing the Atlantic with just two people onboard.

The cost of your insurance is going to vary greatly on your amount of coverage.  Our first policy with Pantaenius had a Hull Premium that was .6% of our Agreed Fixed Value Limit.

Our Pantaenius policy covered us for the following cruising area:

Canadian and United States Atlantic coast and inland waters, Caribbean Sea, and Gulf of Mexico, north to 52° North Latitude, east to 50° West Longitude, and south to 7° North Latitude. Waters of Cuba, Haiti, Venezuela, and the Panama Canal are excluded. It is warranted that the vessel is not south of 30.5 degrees in the Atlantic Ocean, inland waters, in the Caribbean Sea or in the Gulf of Mexico between July 15th and November 1st.

This gave us a cruising ground from Newfoundland to Guyana during the cruising season, and from the Florida-Georgia border north to Newfoundland during hurricane season.

Why We Left Pantaenius

As we were nearing our Panama Canal Transit, we needed to adjust our policy for our 2016 cruising: transit the canal, cross the Pacific, and cruise through the South Pacific to New Zealand before the start of cyclone season.  We contacted our agent at Pantaenius and received a quote to cover this area – at an increase of 284%.  This new policy did not have an exclusion zone, meaning they did not require us to be anywhere specific for cyclone season.  That also meant that we would be paying significantly more despite taking precautions to be in a low-risk zone.

This gets a bit confusing; Gowrie is the parent company for International Marine Insurance Services, and Markel American Insurance Company is the underwriter for a policy called Jackline.

Our new policy with Jackline had a Hull Premium that was 1.4% of our Agreed Fixed Value Limit.   Our premium increased 108% over the Pantaenius policy in the Atlantic, but the Jackline policy for the Pacific was nearly half of Pantaenius’ policy.

Jackline is a worldwide policy covering all the oceans, but it does have restrictions.  We are not allowed to visit some countries (like Cuba and the Philippines) and Africa and Asia are mostly off limits (with some exceptions).  We can not go further than 61.5° N or 50° S (I guess Iceland is off the itinerary).

It helps to map these out for yourself.

Insurance Requirements Around the World

Many marinas have asked us for copies of our Jackline policy.   We’ve never had one come back to us and say that our insurance doesn’t meet their requirements.  However, I suspect they don’t actually review the policy.  Instead, they often have specific requirements in the docking agreement.  Here’s a quote from one marina:

All boats must be insured and carry a public liability for at least $10,000,000. Evidence of insurance must be produced when requested by the Marina Manager.

I do know that in Opua, New Zealand, there was an insurance company in the marina complex that offered temporary public liability insurance to meet the requirements of the marina.  That might be a cheaper option.

Also, when applying for a permit to visit the British Indian Ocean Territory of Chagos, we were required to submit proof of insurance that covered “wreck recovery, clean up and removal”.  Our policy had that covered.

Is Our Insurance Good?

We’ve never filed a claim on our boat insurance.  We certainly think that both Jackline and Pantaenius are reputable companies, but there just aren’t a lot of choices available.  If we ever have an issue with the boat and do have to file a claim, I’ll be sure to write about it! 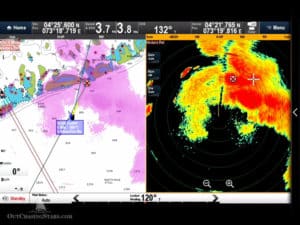 Radar Feature: Rain
We use cookies to ensure that we give you the best experience on our website. If you continue to use this site we will assume that you are happy with it.OkPrivacy policy