Uligamu: Formalities and our First Taste of the Maldives

We arrived in the Maldives from Trincomalee, Sri Lanka after five days at sea with spectacular sunsets and a dolphin escort.  We were dropping anchor on March 27th, our anniversary!  Already, we were stunned by the beauty of these atolls, and excited to be spending 6-8 weeks in the Maldives.

Anchoring in Uligamu was not easy.  Our main guide for the Maldives is Yolo’s report on Noonsite regarding anchoring spots.  Unfortunately, where Jason reported being 3.8 meters deep with a sandy bottom, we found to be 10 meters deep, and possibly a coral bottom.  We faffed about for a bit, motored up and down the west side of the island, trying to find a shallow or at least sandy spot.  We finally took a wild guess and dropped anchor.  When snorkeling later, I checked and we did actually hit sand with the anchor.  Unfortunately, with it being so deep (50-60 feet) and the sandy parts being so narrow, the chain did lay down on top of the (dead) coral.

Upon further inspection, there are alternating stripes of (dead) coral and sand.  Our friends on Slow Flight anchored very nicely in the sand.

Starry Horizons. Our anchor is to our starboard side.

During our passage, we had kept Asad, our agent, up to date on our estimated ETA.  For some reason, when we hailed upon arrival, Asad said he was expecting us tomorrow.  But he said “Don’t worry, customs is here.  Relax, go for a swim, we will come out soon.”

We didn’t have any particular rush, but when the boat showed up hours later with our officials we were ready to go!

Very kindly, Asad brought two of my favorite things to welcome us to the Maldives; two fresh drinking coconuts and a bouquet of frangipani (plumeria for us Americans).

We had seven guests onboard for our formalities including Asad.  Formalities only took about 15 minutes, and then Asad asked that we meet him onshore to finish.

Many of the islands in the Maldives have man-made harbors.  The islands are often surrounded by (dead) coral with no protection.  To combat this, a narrow channel is blasted into the reef, and then a rectangular harbor is built with excellent protection.

David and I dinghied into the harbor.  Once Little Dipper was secured we met/remet Fred, the owner of the cruising boat Serafina, and his partner Maria.  I had chatted briefly with Fred in Trincomalee.  We also met Imaadh, a local who introduced himself to us.  Imaadh is the head councilman for Uligamu.  He was very interested in talking to us about the Maldives and Uligamu, especially with regards to a cruising perspective.  Imaadh claims to have visited almost all of the resorts in the Maldives, and assured us that we will be welcomed.

Asad and his friend (and coworker??) Hammadh took us to a small little cafe where we sat and chatted about what would come next.  Essentially, Asad would file for our cruising permit and we would wait at Uligamu while the paperwork was being taken care of.  Asad told us to let him know if we needed anything.  The little cafe served us some Maldivian snacks, such as bajiya (Maldivian samosa) and kulhi borkibaa (spicy fish cakes), plus some delicious “lemon juice”, a slightly-less-sweet version of lemonade.  All of this was a special treat from Asad!

While we chatted and snacks, Hammadh sorted us out with a SIM card for our phone; about 800 Rufiyaa ($52 USD) for 50 GB of data.  Once we were done with our snacks, Hammadh and Asad loaded us up onto one of the cool electric tricycle trucks and took us for a tour.

We drove out to the north side of the island, passing the local school (with solar panels covering the roof) and the soccer field (with 30+ guys playing soccer).  When we stopped, we had a gorgeous beach with the sunset to our left and a field of wind generators to our right.

Back into the truck, we drove to the south side of town, out to the community farm.  Maria wanted to buy some produce, so we got a tour and eyed a few items for us to buy later.

The next day, our friends Kimi and Trevor on Slow Flight arrived.  They’d been just 24 hours behind us in leaving Sri Lanka.

After Slow Flight got cleared in, all the cruisers (eight people, four boats) received an invitation for dinner ashore.  Imaadh welcomed us at the dock and led us to the home of Nayzi, the local immigration officer.  We were in for such a treat!  String lights were suspended over two tables, and a buffet of traditional Maldivian food, prepared by Nayzi’s wife, was served.  It was such an unexpected moment, and so sweet for all of us cruisers.

The special treats weren’t over.  The next day, the two other boats took off, leaving just us and Slow Flight. We were invited to a beach potluck at the far southern end of the island.  Imaadh set up a picnic table and the guys got their grill fired up (with a little help from Trevor and some petrol).  Unbeknownst to us, the guys were preparing a special surprise – an anniversary cake and a necklace! The day we arrived into the Maldives, the 27th, was our 9 year anniversary.

We cut the first piece and feed it to each other. Of course, David got icing on my nose!

Dinner was a treat itself too.  The guys had gone spearfishing and had a bunch of big, delicious fish to grill over the flames.  Imaadh also had chicken hot dogs, salad, roti, and potatoes.  Add in the food the cruisers brought – wow!  What a feast!

The next morning, Asad invited us to meet one of the local ladies and learn to make roti.  Kimi and I went to our own private roti lesson.

Flour and boiling water to start.

Mix and form into balls.

A special tool to roll out the roti.

Kimi giving it a go!

A little snack during our cooking class.

The kids were excited to show off their pets.

Uligamu is just one small island in the natural Ihavandhippolhu Atoll.  Despite the military base, cruising port, and a population of over 500 people, Uligamu doesn’t have an ATM.  To get cash, Asad, Hammadh, and a few other locals took us to the nearby Ihavandhoo island, which was half an hour by their power boat.  We all (even the locals) pulled out money from the ATM.  Kimi, Trevor, and I were expecting it to be a short trip, to take right back off for Uligamu again.  Instead, Asad directed us to a small cafe, where we had dinner (again, a treat from Asad).

Passing some private yachts and a resort.

A much bigger harbor than Uligamu.

Supply boats in the harbor.

It’s election season, and the yellow banners are for one of the political parties.

It took six days to get our cruising permit – a ridiculously long time.  Asad apologized, but it’s not really his fault, the government just isn’t set up to quickly process these things, which is outrageous considering how much we are paying to visit the Maldives.

When our permits finally came in, Kimi, Trevor and I went ashore to look through the supplies that had just come in.  We bought eggs, onions, carrots, apples, and other produce from the supply ship, and whatever dry goods the stores have available (canned tuna, flour, cereal, etc).

We made a stop at the farm to buy some produce; eggplants and a watermelon.  We went for one last lemon juice and snacks at the cafe.  Asad met us there and gave us our paperwork.

Initial Impressions of the Maldives

The water here is insanely beautiful and very clear.  This makes the view above water just absolutely lovely.  Unfortunately, in 2016, the Maldives suffered from major coral bleaching, and most of the coral is completely dead.

Cruising in the Maldives is expensive.  We’ve paid about $1055 USD for one month, putting the Maldives right behind Panama and the Galapagos for most expensive stops.  However, the length of our stay balances things out more; in Panama we paid for only 3 days in the county, and the Galapagos we only visited for 10 days.  Spread out over 30 days, we’re paying $35 a day.  Although, we got a “free” six days while we waited for our cruising permit.  Additional days will be at an even lower cost per day.

Asad and Imaadh both expressed regret for how much we had to pay.  They are hopefully that the newly elected government will reduce the costs for cruisers.  Imaadh and I also talked about the need for mooring balls in Uligamu to protect what little reef they have.

We’ve never had locals be so welcoming before.  Asad and his team were very generous with their hospitality.  Many of the Maldivian people that we’ve met have worked for resorts; their English is impeccable and they present flourishes of hospitality.

In 2009, the Maldivian president declared his intention to go carbon-neutral by 2020 – the first country to do so.  Unfortunately, the new president has declared a focus on mass tourism, changing the environmental goal to be “low-carbon”.  Nevertheless, schools and other buildings are entirely run on solar (which is plentiful here).

The Maldives used to be one of the poorest countries in the world, but have since become a middle-income country.  Many times in our travels, when we talk to locals, they have never been outside of their home country.  Here in the Maldives, all of the locals we’ve talked to have traveled elsewhere: Bali, India, Sri Lanka, Thailand….

Towns are filled with construction projects and community development.  In Uligamu, new, nice houses and new government buildings are being built.

The Maldives contains a massive dichotomy; the towns and local people are Muslim and conservative, while the largest industry – tourism – is decadent and indulgent.  Private islands are “one island, one resort”.  Alcohol is only available inside the resorts – we can’t buy alcohol at a shop, at a cafe in town, and our friends can’t bring us duty-free alcohol when they come to visit.

The weekend in the Maldives is Friday & Saturday, as Friday is the holy day of Islam.  Shops close for prayer, as all citizens of the Maldives must practice Islam.

Unfortunately, the Maldives has fairly extreme laws, and there has been a lot of public outcry from sentences of stoning or flogging, especially of local women and rape victims.

We will spend the next fews weeks making our way down the atolls of the Maldives.  We plan on clearing out in Gan, the southernmost point, in late May before heading to Chagos. 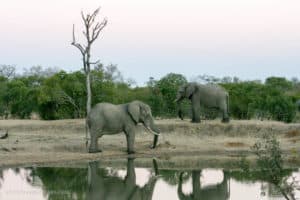 Safari in Kruger Park, South Africa with Honeyguide
We use cookies to ensure that we give you the best experience on our website. If you continue to use this site we will assume that you are happy with it.OkPrivacy policy