Bintan: A Fantastic Meal and Clearing Out of Indonesia

After checking out the small island on Benan in the Lingga group, we took off to sail north to our last island of Indonesia: Bintan.

There are two large islands in the north of the Riau group; Batam and Bintan. The stop for the Wonderful Sail 2 Indonesia Rally was actually two stops: the first in Tanjung Pinang, the biggest city of Bintan, and the second stop at the Bintan Resorts Marina.

This was our least favorite stop in Indonesia. Tanjung Puting is very dirty, and outside of Tanjug Puting is full of resorts. They are probably pretty cheap if you are looking for a resort vacation.

The highlight of this stop was a dinner out…

Dinner at The Manabu

Our best meal in Indonesia! The Manabu is part of the Sadaap Hotel and has a stunning view from their patio over the harbor. We went with Carlos and Linda from s/v Mirniy Okean. The dishes were Indo/Thai fusion: I had crispy duck, David had roasted Balinese chicken, Carlos had Pad Thai….and everything was delicious! Plus, as with our other fine dining meals in Indonesia, the total came to about 700,000 Rp for four people….roughly $50 USD.

During our walk to dinner we found a tennis court, and there were two guys there who invited Carlos to play! I wonder what they would say if they knew they were playing with a French Open Juniors winner.

The patio at The Manabu.

Dessert for me: mango sticky rice.

From Benan it was a short sail with s/v Mirniy Okean into the harbor of Tanjung Pinang, but unfortunately, we were delayed when we motored through a fishing net. The rope cutters did their job of cutting up the net, but small bits got wedged into the prop. David had to dive to clean it out, including removing the anode. And that was a hint of what was to come.

The harbor of Tanjung Pinang is filthy. It is the most disgusting place we’ve ever seen. The trash in Indonesia has always been really bad, but in Tanjung Pinang it was the worst! We even had to clear the prop of our outboard twice – after only 3 trips to shore!

Our only reason to come here was to provision and to give the Wonderful Sail 2 Indonesia Rally our paperwork to exit the country. The rally was set up in the Hote Melin, and as soon as we got to shore we gave our paperwork up.

Carlos, Linda and I went to the Isana Supermarket for a quick provisioning trip. It was a short walk, but with all our groceries, we hired a taxi to go back to the hotel that was hosting the rally.

We had a convoy of three rally boats leaving Tanjung Pinang and headed to the north side. While motoring along, we snagged another piece of trash in our prop and David had to dive in again to get it loose. This one came out easily. We still didn’t have the anodes on our port prop, so when we arrived at the anchorage, David dove and reassembled the prop, which meant he had to take EVERYTHING apart.

After one night in Tanjung Pinang we were ready to get the hell out. We moved to the north side of the island, where the final rally dinner was to be located. We were there early, having skipped the events in Tanjung Pinang. The anchorage was rolly, but not the worst we’d ever had.

The marina is next to the Bandar Bentan Telani Ferry Terminal, which operates ferries to Singapore. There are a taxi stand and convenience store in the terminal. The marina appears to be used mostly by sport fishing boats from Singapore. Their rates come to about $30 USD per night for Starry Horizons, although we didn’t berth there; the first rally boat to come here ahead of us tried to get a slip, but was told the marina was “full” even though there were only 3 slips of 14 being used. The marina lacks amenities: no laundry, restaurants, or fuel.

This area of Bintan is full of upscale resorts. The closest resort is Treasure Bay Bintan, which has a huge salt water lagoon for water activities. You can purchase a day pass for 100,000 Rp ($7 USD).

An Alternative to Bintan: Batam and Nongsa Point Marina

Several rally friends skipped the farewell party and sailed to Nongsa Point Marina on the nearby Batam Island. While we didn’t go there, I am comfortable saying Nongsa is the nicest marina in Indonesia. There is also a ferry near Nongsa Point that goes into Singapore, so several friends left their boat in Nongsa while they went into the big city for a few nights. Slips at Nongsa are approximately twice the cost of the Bintan Resorts Marina, but the facilities are significantly better.

Another difference would be the cost to clear out; we paid 500,000 Rp to the rally to clear out on Indonesia from Bintan, but clearing out from Nongsa Point costs 1,000,000 Rp.

By now the number of rally boats had significantly declined. The two rallies had merged way back in Labuan Bajo, but the number of boats at the farewell dinner was only 20 out of the original 66. The farewell dinner was delayed by a torrential downpour. All the cruisers were listening into channel 72 on the VHF, and all agreed to stay put until the rain lightened up.

When we arrived at the ferry terminal, an hour late, the officials were waiting for us with our final clearance documents. We all picked up our packets and checked for issues. The rally organizer had told the officials everyone was going to Malaysia next – not so. Several boats, including us, had to wait for our paperwork to be corrected. Thankfully the ferry runs into the night so the changes were made quickly.

Buses were waiting to take us to Warang Yeah!, the restaurant hosting the final rally dinner. We were on the second bus and I guess the event started when the first bus got in because we missed the speeches and demonstrations. However, once we all ate, there was more dancing outside with live music (including an accordion, which I thought was weird).

The first traditional dance where they danced as a couple.

Getting all the cruisers out dancing!

With just a few dances, the event was over and we loaded up the buses to go back to the marina and say goodbye to all of our friends! 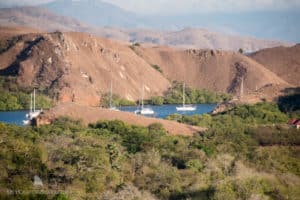 100 Days Cruising Indonesia & the Wonderful Sail 2 Indonesia Rally
We use cookies to ensure that we give you the best experience on our website. If you continue to use this site we will assume that you are happy with it.OkPrivacy policy