Finally, our last stop in Lingga was the small island of Benan.  After a 5 nm sail, we had finally caught up with the rally!  Benan is a small and delightful fishing village.  It may have been the smallest village for a rally stop.

Sunrise from the beach.

I attended the Welcome Ceremony which was on the beach on the north shore of Benan.  We enjoyed a martial arts program by the boys and traditional dancing by the girls.  As usual with a stop, we had VIP seating and snack boxes to enjoy.  A few songs were played and we were encouraged to dance with the local ladies.  I even gave a speech!

Everyone is very happy to pose for photos.

The regent’s wife, the VIP (aside from us of course).

I had a seat of honor next to the regent’s wife.

Later in the afternoon, Linda and I walked to the beach to put together our Halloween costumes.  The town had been very quiet, and we soon found out why; everyone was on the beach participating in games and sports.  No one had told the cruisers, so Linda and I were the only ones there.  We stopped to participate in traditional rowing canoe races, where we sat up at the front and cheered the rower on.  Then, Linda and I got to take a turn rowing.  The traditional method is to stand at the back of the canoe and face forward.  The oars are crossed in front of you and you push forward when the oars are in the water.  We’ve seen many people row like this in Lingga.

There had been other games that we missed, but somehow Mark & Susan from Erie Spirit had caught games like the greased pole climb and a balloon game.

There is a small village in Benan and they do have a little grocery store, mostly with cookies and sodas, but you can get produce.  Our last day in Benan, a Saturday, when we went to shore a supply boat had come in and two women were set up selling vegetables.

The last event of the single day in Benan was a dinner that evening.  There was some confusion about the dinner – the village thought it was the 1st while the cruisers had been told the 31st.  Dinner was thrown together (and was ho-hum) but the highlight was that about a dozen of us dressed up for Halloween.  Linda and I teamed up and she taught me how to make a Tahitian belt made of leaves that traditional dancers wear.  David went as a ninja.

During the party, prizes were given out for the canoe races, and since Linda and I were the only cruisers to participate, I came in second place and got an adorable hand carved turtle!

The highlight of Benan is definitely the beach. There are cottages just off the beach that you can rent, and the beach is well manicured with large coconut trees.  It would be a beautifully idyllic vacation spot.

The beach cottages in Benan.

How to Get to Benan

There are two daily ferries that come into Benan.  One comes from Tanjung Pinang on Bintan Island, called the Lintas Kepri MV.  Also, there is the Istiqomah MV which provides service to Benan from the Telaga Punggur Ferry Terminal in Batam.  The ferries take about 90 minutes.  Both Batam and Bintan are accessible via ferry from Singapore or plane from Jakarta.

Sunrise from the beach in Benan.

We were the last boats to exit Benan – we were still ahead of schedule as the rally had 3 days blocked out for Benan but only had one day of activities.  The next stop was Bintan Island, where we were clearing out!

There might be more goats than people in Benan.

There aren’t many stray dogs there, but this one was adorable and in need of some love. 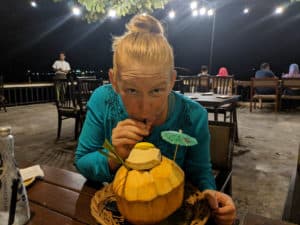 Bintan: A Fantastic Meal and Clearing Out of Indonesia
We use cookies to ensure that we give you the best experience on our website. If you continue to use this site we will assume that you are happy with it.OkPrivacy policy