Sailing from Australia to Indonesia: Horn to Debut

We’d spent about a week anchored off of Horn Island, exploring Thursday Island, the capital of the Torres Strait Islands. As most of the rally fleet was here, we were in good company, getting to spend time with friends. Throughout the week, most boats took off sailing from Australia to Indonesia, while we got held up waiting for a package to arrive.

Our package finally arrived, and we cleared out Friday and departed Saturday morning at 6:30 am. While we were at the back of the pack, we certainly weren’t the last boat; there were still three boats left to clear out, and a few other rally boats in the anchorage.

We departed with three other boats; Slow Flight, Fathom, and Storm. We timed the start well, as the current around the islands can be formidable. Starry Horizons zoomed away with three knots of current pushing us out.

The winds were much lighter than we expected (down to 4 knots!), and everyone struggled with sail configurations. The sea state didn’t help either, with small chop causing our mainsail and boom to flog around. We were hesitant to motor too much, as diesel will be a challenge to get in Indonesia. Very early on, Storm started to have issues onboard, and Slow Flight was kind enough to slow down to assist Storm and provide moral support.

For a majority of this passage, the water depth was shallow (for the open ocean) at 100-200 feet.  With that shallow of water, it made for beautiful colors.

It may have been light but the water was beautiful!

Finally, the wind picked up a bit and we settled into our first night out at sea with our sails set to wing on wing with the main and genoa.
The second day we switched to flying our screecher off the windward bow, which is great for sailing between 135-180 degrees to the wind.

On our second night, I was passing well off of some fishing boats when I noticed a flashing light in front of us, alternating red and blue. I have never seen anything like this out at sea, and I monitored the bearing (angle) of the light as we approached it on our port side. We got lucky; we passed very near to what was apparently a buoy. I saw another one further off our starboard side, and the thought crossed my mind that maybe they were marking a fishing net. Starry Horizons was too close for me to have the time to change course, and thankfully we passed by with no drama.

(Edit:  After seeing some Indonesian fishing boats with the same light on top, it’s very possible that it was a fishing boat.  Scary!)

Day three saw us back to wing on wing, and we also collected a stowaway; a rather large bird who sat on our starboard transom for a rest (and a shit).

Passing the time with some exercise.

Night three was uneventful, but day four was a doozy. First, we landed a small blackfin tuna (bigger than the little tunny, smaller than a big eye). We got the tuna onboard and I got to work when David shouted “Whales!” I didn’t get a good look (since I was holding a bleeding tuna) but David swears they were orca whales! Perhaps they were attracted by the struggle of the tuna?

As the day came to a close, David and I sat at the helm to watch the sunset after dinner. We were on a starboard tack with our screecher and main. One by one, lights turned on around us. We were surrounded by fishing boats! We were in Indonesian waters at this point. As the boats were very brightly lit up, we assume they are catching squid. I counted the lights I could see around us and the lights I could see over the horizon and got 47 boats!

David helped me furl in the screecher and we switched to the genoa. The screecher blocks more of my view and is unable to tack as quickly as the genoa, and when you need to weave your way through fishing boats, you want to be as maneuverable as possible. My entire watch was spent relying on eyesight and radar to pick our way through the fleet of boats. Thankfully most were very brightly lit and barely moving, although they were dragging something behind them. A few boats were on the move and displaying running lights. David came up for his 2 am watch just as we left the last of the fishing boats behind us.

The next morning David was down for a nap when I spotted land. We made our way up the west coast of the island and dropped anchor amidst the rally fleet in Debut. Surprisingly, there is plenty of room for the fleet, but the coordinates the rally gave us were incorrect and several boats found out the hard way (by hitting bottom).

Already we’ve seen some of the benefits of sailing with a close group of boats. All through the passage, we messaged with Slow Flight (who came in 24 hours behind us) and Mirniy Okean (who was 24 hours ahead of us) via satellite phone. Slow Flight stayed with Storm the whole time, which was great as they had a lot of major issues. Other boats limped in with problems as well and the fleet was quick to round up dinghies for assistance.

First sunset in Indonesia listening to the call to prayer.

We are looking forward to exploring Indonesia!

Watch the Video: Dodging Fishing Fleets on the Way to Indonesia 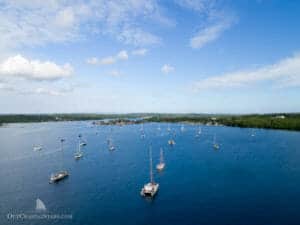 Debut, Kei Islands, Indonesia
We use cookies to ensure that we give you the best experience on our website. If you continue to use this site we will assume that you are happy with it.OkPrivacy policy