Our next stop after Great Keppel Island was Middle Percy Island (sometimes called Middle Island, in the Percy Island group).  Middle Percy is the largest island around, and only has one small anchorage that serves as protection from the prevailing winds – West Bay.

The view of West Bay all to ourselves…and Starry Horizons rocking and rolling.

West Bay was empty when we arrived on June _.  It’s understandable why – with winds of 20 knots or more, an uncomfortable swell rolls in.  Usually, we (as a catamaran) fare better than monohulls with the swell, but it was still pretty bad here.  I suspect that the SE swell bounces off the neighboring Pine Islet and directly into West Bay.  However it arrived, it’s best to anchor as close into shore as possible (which is fairly easy as West Bay is lovely sand) and tuck into the south edge.

We decided to tough out the swell for one night, as West Bay is a famous cruising waypoint on the east coast of Australia.

Middle Percy used to be a sheep station until 1964, when Andrew Martin took over the lease and developed West Bay into a welcoming pit stop for cruisers.  West Bay holds a few structures, the most famous being the A-frame. The A-frame offers cruisers amenities – there’s an outdoor kitchen, hammock, picnic tables, a small kitchenette, and a guest book.  But it goes beyond the guest book – anyone who cleans or contributes in some way is invited to hang a sign or flotsam in the building, commemorating their visit.  Our cruising guide claims that there are boat names going back 50 years.  The oldest we could find was 1980.

Whoever visited last left the A-frame tidy and clean.  After hunting for the names of any friends’ boats, we visited the small office room to sign the guestbook and make our contribution.  There was fresh fruit for sale – passionfruit, small citrus, starfruit, and coconuts – plus honey and mango chutney.  We bought a little bit of everything (I can’t miss the opportunity to buy a coconut that someone else has gone through the trouble of husking) and signed the book.

Lots of Middle Percy info to be had.

We walked along the beach to the north side and climbed the rocks to look over into the lagoon channel.  The lagoon was empty save one boat which belongs to the caretakers of the island.  Google Maps shows many boats there, so I was surprised.  The lagoon channel is dry at low tide, and narrow.  It would take balls to go in at high tide.

The channel to the lagoon.

The view from the rocks.

Backtracking, we walked the main path to the lagoon and surveyed the mangrove trees and dry creek bed.  In addition to the caretaker’s shed and boat, there were the ruins of the homestead of Captain John Cook Till.

With the A-frame is also a building called the treehouse.  We did see people there, and the sounds of construction.  Signs say private residence, so we left well enough alone except for the friendly dog who came out to greet us for some behind-the-ear scratches.

David and I went back to SH for lunch and to gather our flotsam.  David dropped me off on shore to create and hang the flotsam myself.  It’s fun finding a good spot!  Surprisingly there are still many – in 50 years, either there aren’t that many visitors, or most of them don’t leave a flotsam behind.

After I finished my job, I took off for a hike.  I set off on the “long” way to the homestead.  While the short track is 2km, the long one 4km, but the long one has two big advantages:  the short one is flooded at low tide and is only a small goat track.  The long track is along the ridge of the island and is actually a dirt road.

I turned around about halfway, about an hour in, at Andy’s Lookout.  The view is great, looking down on South Percy.  I had passed a turnoff to Rescue bay, and a sign that said: “Turn on your phone….let it roam!”.  Cell phone service is only available past a certain elevation.

Turn on your phone….let it roam!

The halfway Point between West Bay and the Homestead.

On my way back, I startled a big red kangaroo and watched him bound off into the woods.

The swell was bad enough that we were glad to leave after one night.  We departed just before sunset and sailed 117 nm dead downwind to our first stop in the Whitsundays – Whitehaven Beach. 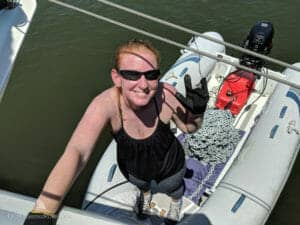 3-Year Maintenance (Some Routine, Some Not)
We use cookies to ensure that we give you the best experience on our website. If you continue to use this site we will assume that you are happy with it.OkPrivacy policy