After our time in Lake Macquarie, David and I looked at the weather.  We needed to be at The Boat Works by Feb 19th for our big boat project, and the winds were blowing the wrong direction – north – for us to get there.  However, coming up we had a window of a few calm days that we could use to put the hammer down and motor up to Southport.

We left Lake Macquarie on January 19th with a full tank of fuel.  We motored along on one engine and just before sunset, we went to switch engines.  Our speed dropped almost a knot!  David was quick to diagnose the issue – that prop was the one that we had to replace in New Caledonia and didn’t have prop speed on it.  The prop was clogged with growth!  We weren’t far from Broughton Island, so we took a detour and anchored on the south side of Broughton Island in Coal Shaft Bay.

David dove in and cleaned up our prop and we were back in business.  We kept our motoring going through the night.  The next day, it became apparent that we weren’t going to make the Southport Entrance by sunset.  Instead, we tucked into Coffs Harbour, arriving at 9 pm into the familiar harbor.  We anchored close to the entrance, just tucked behind the breakwater.

The next morning we woke up early and took off.  The wind picked up higher than expected and we even got to take our screecher out.  Unfortunately, there was also a countercurrent slowing us down.

Finally, on January 23rd, we made it to Southport.

The  Southport Barway is notorious thanks to this famous video of a catamaran surfing in.  Thanks to the three days of very light winds, the waters and winds were flat calm and it was a major non-event.

Our first anchorage was at Wave Break Island, the first island after the barway.  We anchored on the north side, outside of the channel.  The current is pretty strong here.  There’s also an insane number of weird boats.  It was an interesting introduction to Queensland yachting laws – there are laws in place regarding how long you can be anchored in one place, but there are too many loopholes and too little enforcement.  There are a lot of very….interesting….boats.  Tons of houseboats too.   The best part was the view of the skyline of Gold Coast, the 6th largest city in Australia.

This floats at high tide. Locals say it’s been there for months.

Runaway Bay has a few attractions to it.  We pulled in to fill up on diesel.  From Crab Island, we accessed the dock and marinas to use the laundromat and to go for walks in the area.   The Runaway Bay Shopping Centre is on the channel and is welcoming to cruisers/boaters.  There’s a dock at the center and has access to several large grocery stores and a mall.

LD at the Runaway Bay dock.

Got together with some local lady sailors, courtesy of the Women Who Sail Australia group.

We anchored just to the west of Crab Island, outside of the channel.  The holding was good, but the water is subject to the wake of passing vessels.  It’s not super pleasant, but it’s dinghy distance to Runaway Bay Mall and Runaway Bay Marina, so very practical.

At this point, Australia Day was fast approaching, and we had heard that the traffic in the Broadwater was going to be ridiculous!  David and I wanted to be uber productive on boat projects and videos, but didn’t think we could do that being waked a lot and crowded over the holiday.  Thankfully for us, our new friends Mark and Susan offered their private dock in Sovereign Island FOR FREE!  The dock is tucked away on the inside of the subdivision, and Mark and Susan graciously offered us access to their home while we were there.  It was SO generous of them, and we really enjoyed having a few chill days away from the hustle and bustle.

Yes I did go for a swim in the pool.

A big thank you to Mark, Susan, and family for having us!

Technically, you can’t tie your boat up to the docks right across from where we anchored, but you can beach your tender.  There is a public dock just north of the Ephraim Island Bridge, but there is a time limit (I think an hour?).

LD and SH in Paradise Point.

I might be obsessed with how adorable this boat is.  It’s a Florida Bay Coaster.

While anchored at Paradise Point, our other new friend Craig came by to pick us up in his boat and take us for a high speed (read: faster than Starry Horizons) expedition out to Tipplers Cafe.  Tipplers is on South Stradbroke Island and caters mostly to boaters.  There’s an anchorage right out front of the cafe, and we saw about 6-8 boats there during our lunch.  You can get there via car too, but it requires taking the Couran Cove Resort Ferry.

We had a delicious lunch of fish & chips while we watched the seaplanes come and go from the island.

Craig also took us up to Jumpin Pin to see the sand dunes and pass.  We can speak from experience that the pass is VERY fast and VERY shallow.  Thankfully Craig was prepared with an anchor and we chilled in the pass until the current switched and we were able to get out.

David even got to drive Craig’s boat!

I think David’s having TOO much fun driving a go-fast boat.

While at the Boat Works, we held a meetup for our followers.  It was our BIGGEST MEETUP EVER!  In hindsight, we shouldn’t have been surprised, because our analytics on Youtube and Facebook show that this is the most popular area in Australia.  We had 30 people come, from other Helia owners to people building their own boats to couples getting ready to set off cruising.  It was AWESOME to meet everyone.

All of these areas are covered in the Queensland Maritime Safety’s Beacon to Beacon guide for Northern Gold Coast.  We would have liked to make it into the Gold Coast proper, but didn’t.  Here’s a travel itinerary for Gold Coast.

On to The Boat Works

After over three calm weeks, we happily motored our way up the Coomera River to The Boat Works. 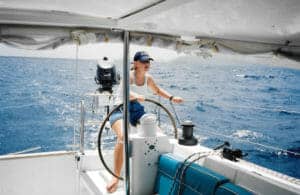 Women in the Sailing World
We use cookies to ensure that we give you the best experience on our website. If you continue to use this site we will assume that you are happy with it.OkPrivacy policy