Ningaloo Reef – Under the Water with Sail Ningaloo

David and I left the Red Centre and flew to Perth, where we were welcomed by friends and stayed out in Fremantle. We did get to the Fremantle Market and spent a morning walking along the foreshore and out the jetty. After two nights, it was time to get out to our next major destination – Ningaloo Reef.

Disclaimer:  Some of the activities mentioned in this post were received free of charge or at a discounted rate.  We were psyched to have their support, but this post reflects our honest opinion on the activity.

To get to the Ningaloo Reef area you fly to Learmonth, which is a small civil airport on the Learmonth Royal Australian Air Force (RAAF) base. It used to be a US Air Force base, but the US handed it over to the Australian government. Also nearby is the Harold E. Holt Naval Communication Station, which has HUGE antennas that were designed to communicate with submarines in the Indian Ocean or the Pacific Ocean.

How to Maximize Your Time in the Water

All the best activities in Ningaloo are under the water. The area is famous for it’s coral and migratory sea creatures, and the Ningaloo Reef is Australia’s largest fringing reef (meaning it’s easily accessible from shore and you don’t have to cross open water to get there). Ningaloo is 160 miles long and extends along the west side of the North West Cape.

Sail Ningaloo provides transportation out to Coral Bay via a Sail Ningaloo shuttle (at additional cost), that picks all the guests up along the way. The boat, Shore Thing, was waiting for us at the dock, and we loaded quickly, got the safety briefing and tour, and took off!

Sail Ningaloo provides guided dives with all the dive gear (at additional cost).  We went on four dives during our stay, and we could have done a fifth but opted not to.  We had a lot of time in the water!  Dives were first thing in the morning, usually the first at 8 am.  We’d resurface, snack and move the boat, dive again, and then have lunch after the second dive.

This is a shallow dive (9 meters) with coral heads.  Our highlights were:

A wall dive, this one was my favorite.  We saw at least a dozen nudibranchs, which, I’ve only seen one before in Fiji.  Who knew they were so hard to capture on camera?  The GoPro can’t focus that well on a close-up.

This dive has a shark cleaning station, where cleaning fish hang out and clean reef sharks of parasites.

Mega Maze is more about the landscape.  The dive goes through columns and pillars, weaving around.  A diver could easily get lost if you weren’t paying attention.

back to home base.

We went on snorkels in the afternoons at Ningaloo Reef, but if you aren’t a diver (there were 8 guests onboard with Sail Ningaloo, and 3 of them didn’t dive), you can snorkel in the mornings instead of diving.  After lunch was usually siesta time where everyone got quiet.  There was a snorkel around 3 pm and then the last snorkel was around 4:30 or 5 pm.  An awesome part of snorkeling with Sail Ningaloo?  Pickup whenever you want.  One crewmember was always in the water with us, and one crew member was always in the tender.  Getting tired?  Just raise your fist out of the water and they’ll come pick you up!

I don’t know what this is, but it’s some kind of mollusk with it’s foot out!

All of these shots are stills taken from GoPro footage from our GoPro HERO4 Silver.  Since then we’ve upgraded to a GoPro HERO6 Black.  We opted not to bring the underwater housing for our Panasonic camera while traveling around Australia.  For a complete look at all of our gear on board Starry Horizons, check out our Amazon shop.

That’s just the underwater part!  Next post is about living onboard Shore Thing.

PS.  Happy Anniversary to us!

*smooch* happy anniversary to us!

Watch the Video:  Cheating on Starry Horizons in the Ningaloo Reef 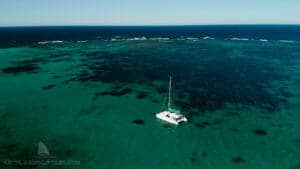 Sail Ningaloo: Liveaboard Sailboat on Ningaloo Reef
We use cookies to ensure that we give you the best experience on our website. If you continue to use this site we will assume that you are happy with it.OkPrivacy policy