We took an all day sail to get up to Lake Macquarie on January 10th. The bar crossing was easy, and we raced a few other sailboats in and snagged the last of three mooring balls in the east side of the bridge. The bridge opens on the hour during the day except for rush hour, so courtesy moorings are provided on either side. The boats that didn’t get a mooring circled for the half hour waiting for the bridge. It’s a narrow bridge, and the pressure is on to not hold up the line of boats coming through, but we made it through just fine.

The Swansea channel bridge can open on the hour between 6 am and 7 pm (with some exceptions).  You must give an hour’s notice, and thankfully there are 3 mooring balls on the outside and 2 mooring balls on the inside.  For more info check the RMS website on bridge opening times.  We started up our motors and hightailed it to make the bridge opening and get a spot on the mooring.  We grabbed the last mooring, and two other boats came in after us and had to circle for a while while waiting.  The bridge opening is fairly small, and the current can be very swift.  Deeper draft boats should only take the Swansea channel at high tide.

We have to say that we have made some awesome new friends in this area. David G came to our Sydney meet up from his home in Newcastle. He came down and picked us up for a fun day in Newcastle. David H also attended our meetup, and he and his wife Joan keep their catamaran in Lake Macquarie. They brought us dinner to Starry Horizons one night!  And finally, we meet Tony and Neil, who invited us over for dinner at their house. Everyone gave us great advice and offered us assistance if needed. Thanks ya’ll for making our visit so fun!

We immediately motor sailed across the lake to Kilaben Bay, where we picked up one of two courtesy moorings in the town of Rathmines. The public jetty made going for a walk easy, and the point here used to be a sea plane base during World War I. We had hoped to see a Catalina plane, but they only recently purchased one and are restoring it. Still, we enjoyed the memorial to the fallen and seeing the mess-hall-turned-lawn-bowling-club. Rathmines has a small IGA and a great Rathmines Butchery for provisioning. The bakery was closed from Christmas to Australia Day.

This island in the lake is rugged and rocky. Dinghy access is questionable, as theres no beach, just a rocky shelf. David H says there are goannas living on the island. We just enjoyed the view and quiet.

There is one mooring ball on the south side and two in the north side. In a string southerly, the north shore of Pulbah is very popular.

Definitely our favorite stop in the lake. David H recommended it, and it was a blast!  We came ashore at Morisset Park and walked around the abandoned mental hospital. We kept a sharp lookout, until we spotted our targets – kangaroos!  First it was just one small female, then one small male, and then we came upon a mob of 50!

We slowly walked forward, but then a big male came bounding over, beelining for us, and made us really nervous. Kangaroos can be dangerous. David and I were backpedaling quickly and the kangaroo stopped just a few feet from us. I’m sure he was looking for handouts. There are signs all over “please do not feed the kangaroos”.  We gave the herd a wide berth and walked on the road to the other side, and again, a big male (not sure if it was the same one) came bounding up.  They get very close and have no qualms about looking for food.

I call this the Kate Winslet. This is the small male that was alone.

He got up when we approached.

There’s a public jetty off the RSL that is in major disrepair, but usable. There’s a very nice IGA just a block away. David and I enjoyed walking along the foreshore in both directions.

A view from our walk along the Wangi foreshore.

The RSL was hosting an international regatta, and our hike out to the point was accented with views looking out into the lake and the sail boats. Seeing 40 or so sailing dinghies with their Spinnaker up on a lovely day is spectacular. Plus, the gorgeous houses on the shore were fun to check out.

Starry Horizons at night off Wangi.

With mooring balls and a public jetty, Murray’s is a fun stop. There’s lots of camping and picnics on shore.  Also, there’s a popular restaurant called The Lakehouse Cafe, although we didn’t eat there. A friend told me a fur seal had been spotted here, but no luck on that front for us either.

The Cruising Helmsman writes about their Favorite Places in Lake Macquarie (fairly old and a little out of date). 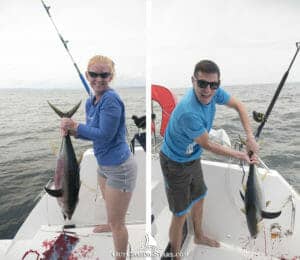 Fishing Gear for Cruisers: How We Caught Our Five Best Fish in 2017
We use cookies to ensure that we give you the best experience on our website. If you continue to use this site we will assume that you are happy with it.OkPrivacy policy