Cruising the Bay of Islands

In addition to cruising the Bay of Islands and visiting some of these awesome anchorages, we also toured some of the nearby towns, including Kerikeri, Russell, and Opua, as well as visited the Waitangi Treaty Grounds.

Some of the island belongs to the Department of Conservation, some of it is private. It’s a small island, but the bay is large and beautiful. We arrived on a Friday and were surprised at the number of tour boats coming in for a stop. Sometimes we were swarmed with kayakers, and other times the beach was littered with beachcombers.

It wasn’t long before friends popped in to join us – Quixotic with Lewis and Alyssa. They’ve spent most of their season doing MAJOR projects (such as new engines) before they head up to Fiji for their first charter season. Check out their website for chartering or their blog for boat projects – there are no bareboat charters in Fiji, and they will be operating out of Savusavu, close to some amazingly beautiful places in Fiji.

Also joining us was Gypsea Heart, who has recently been sold, so instead of hanging with our friends Sandy & Rankin, we got to meet Gypsea Heart’s new owner, Jake.

Our second night we had Lewis & Alyssa over for dinner (Gyspea Heart had taken off already). It was a great chance to break out a bottle of wine and celebrate our anniversary.

Picking up Our Visitors

Sunday we took off for Paihia to pick up our (new) friends, Liz and Breena. Technically, David and I had met Liz before, but most importantly, Liz is David’s best friend’s sister. Breena and Liz had finished a 2-week road trip in New Zealand and took the bus up to meet us in Paihia. Paihia is not a great anchorage because the ferries and tour boats run in and out all day, so Monday we upped anchor and headed back to Motuarohia, where we anchored next to our friends S/V My Dream.

Hiking to the Top of Motuarohia

The big thing to do on Motuarohia is the hike. Having done it twice solo on our previous stop, I knew it’s short, but rigorous, with stunning views down on the island.  The four of us did the hike easily in a half-hour round trip.

After dinner, Claudio, the owner of My Dream, came over with his friend Tom. We first met Claudio back in Tonga with our under-40 crowd. His wife Augusta and daughter Maeva are back home in Italy, while the boat is up for sale in New Zealand.

Shooting the Milky Way on Motuarohia

As the night got darker, the sky was clear enough that I went to shore to try some more night photography. All four of us packed up and went to shore in Little Dipper. Our guests ohhed and ahhed over the bioluminescence in the water, and the Milky Way was shining brightly to the naked eye.

Our next stop with Liz & Breena was the far Urupukapuka Bay on Urupukapuka Island. We stayed two nights here, and the big draw was the complex system of hiking trails around the island. We did the two main loops, which included the highest peak in the Bay of Islands.  The hike took us about two hours.  The bay was big and empty, as most people choose to go to the western side of the island instead of the east.

After dropping Liz and Breena off back at Paihia, David and I motored back out to Moturua Island, where our friends Kyle and Shelley on Blowin’ Bubbles had just arrived from Bland Bay (we last saw them in Whangarei for about 5 minutes – they tied up right behind us on the dock and then we left).  Moturua Island is medium-sized (compared to the two we’d already been to).  There is one loop trail around the island, which Kyle and Shelley hiked.  On Saturday, Kyle and Shelley picked me up and we took their dinghy all the way around the island, stopping at the beaches to poke around and explore.  Moturua is full of craggy rock formations, that made for really interesting exploration.

Watch the Video:  Cruising the Bay of Islands with 3 Lovely Ladies 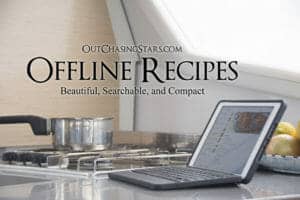 Saving Recipes Offline
We use cookies to ensure that we give you the best experience on our website. If you continue to use this site we will assume that you are happy with it.OkPrivacy policy