Honeymooning in Tahiti and Moorea

David and I were spending three months in French Polynesia, sailing from island to island. We flew back home for one of my best friend’s weddings, and we returned to Tahiti with the newlyweds! They spent a week with us on Tahiti and the nearby Moorea Island.

About Tahiti and Moorea

Although everyone speaks English, French and Tahitian are the official languages, although in the outer islands of French Polynesia, like the Marquesas, you’ll find local dialects.

The currency is the Polynesian Franc, which is roughly 100 CFP = 1 USD.

Yes, of course in Tahiti and Moorea there are the options for an all-inclusive, over-water bungalow experience. But that’s not what our friends wanted.

If you do want that experience, check out:

If you are looking for something with a bit more of a local feel, here are some well-rated hotels:

We rented a car to take us around the island on a rather gray and drizzly day. The weather did not deter us in the least though!

There is one road that travels around Tahiti Nui, the Monoï Road.  It’s about 70 miles in circumference, so we had plenty of time to make it all the way around.

Our first stop on the trip, it was just a short walk to the three grottos. They are named Ana-Vai-poiri, Ana-Mata-vaa, and Ana Teatea. Ana means grotto, the other words are descriptive; dark water, canoe-shaped, and dazzling white, respectively.

The pools look lovely but you can’t swim. It was very serene though, especially because the rain was making the grotto entrances drip dramatically.

There are some cool old photos of Mara’a and a traditional story.

We stopped at this black sand beach and watched surfers and bodyboarders play in the water. Tons of people were out, even for a dreary day.

This waterfall was much bigger and there was a more organized garden here.

This blowhole is formed by a lava tube, much like the one we saw in Santa Cruz, Galapagos. Lava flows down the landscape and hardens. Because it is a different type of rock from is surroundings, it wears away faster, leaving the surrounding rock as the tube.

At Arahoho, there’s a natural tube coming up from the shore where the blowhole comes out. It sounds (and looks) quite a bit like dragon’s breath!

We stopped at a small water feature that had many, many cairns, which actually looked like sculptures. They were very carefully balanced I was certain they must have had bars or glue or something but no. We walked along the side and all the way in the back I noticed some small eels in the water. As we walked back towards the car, one of the locals who was swimming shouted for our attention. We looked at him as he stood up, cradling a giant eel in his arms!  The eel slid around and slipped through his arms several times, but the man was always able to find him and pick him up again. It was wild!

Back on Starry Horizons we all showered and changed, and headed out to dinner at Les Roulettes, a gathering of food trucks in a local square. The trucks all set out tables, chairs, and umbrellas, so the rain wasn’t a problem. It’s actually very cute, you sit at the tables as if you are at a restaurant and they take your order. David had Chow Mein, I had poisson cru (can’t seem to get enough of it) and Liz and Brandon had a Mahi Mahi sandwich. Dessert? Crepes!

The next morning I went for a run, and ran west and found the exercise park of Papeete along the waterfront. It is lovely, and a lot of people (mostly people who look like locals) are out running. Next, I met Liz and Brandon in the market. We bought some fruit (star fruit and papaya), tomatoes, dried smoked bananas, fresh coconut milk, and I even found cilantro!  I also bought a necklace for myself, which I never do, but I so thoroughly enjoy the manta rays we have seen I wanted to commemorate it.

Ferry between Tahiti and Moorea

There is a ferry that runs between Tahiti and Moorea every day, 3-7 times a day. Aremiti runs the ferry and the cost is 2,320 XPF per person.

Hiking Among the Pineapple Plantations

With Liz and Brandon, we geared up to hike around Cook’s Bay. We left from the Bali Hai Hotel and walked south along the road. Our goal was to get a view of the bay from above, and although we didn’t take the road I was trying to find, we did get a stunning view of Cook’s Bay and a visit to the pineapple plantations.

Just near the InterContinental Hotel, there is a place where the tour boats come to feed and swim with the stingrays. Immediately, we can see the clear water, the sandy bottom, and our new friends; black-tipped reef sharks and stingrays. We psych ourselves up, put in our masks and snorkels and carefully slip into the water. Liz and Brandon were nervous and huddled together. The stingrays swam close and bumped into us, looking for food.

We enjoyed their attention until they lost interest in us and then we pulled out our secret weapon: canned sardines. Liz and Brandon opted to get in the dinghy and feed them from above while David and I fed in the water. The stingrays loved it!  They slide up your body, putting their mouths near you. I didn’t let their mouths get close to my hands, I just let the food go in the water and the stingrays sucked it up. They don’t mind being handled; I gently touched them along their wings and even ran my hand between their eyes.

The food did cause the sharks to get closer, maybe as close as five or six feet away. The food also brought out larger fish such as triggerfish and pompanos.

That evening we went to dinner at the Bali Hai hotel. We shared poisson cru starter, David had steak frites, Liz and I had shrimp curry, and Brandon had grilled Mahi Mahi. I thoroughly enjoyed the Mai-Thais.

Friday nights also include a free Polynesian show. It was live music from a four-person band, with seven dancers. The audience was a small group, so we all had a good view and Liz and I got picked for the audience participation, a dance lesson.

Say Goodbye to our Honeymooners

We had such a good time hosting them. Liz and Brandon were laid back, great to travel with. They took our hold ups in stride and I think they enjoyed themselves.

Watch the Video:  Honeymooners in Tahiti 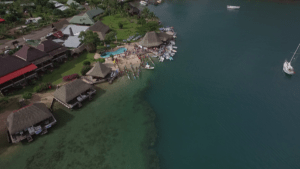 Tahiti Moorea Sailing Rendez-Vous
We use cookies to ensure that we give you the best experience on our website. If you continue to use this site we will assume that you are happy with it.OkPrivacy policy