Dominica: Rugged Jewel of the Caribbean

This is the most we have seen of any single island in the Caribean. If you don’t know much about Dominica, you should know it’s tiny!  Not just size, but it is the most undeveloped country in the Carib. Unfortunately, I think Dominica has to deal with a lot of issues within the country. We saw many buildings which were “donated” by larger countries (China, Japan, and Venezuela), apparently to gain votes for UN policy development. However, the infrastructure of Dominica is a real problem. Tropical storm Erika in 2015 destroyed many bridges on the west coast and we encountered many washed out and damaged roads. The lack of development means that getting running water and electricity is difficult. To top it off, freedom of speech and women’s equality lag behind most Caribbean countries.

BUT, it’s a beautiful country and we found it an excellent home for two weeks.  It’s not well touristed, which we love, and has a lot of rugged beauty.  We did see a few cruise ships making the most of their one day in Dominica, including some sailing cruise ships.

Where to Stay in Dominica

We stayed in Portsmouth, which is on the northwest side of the island.  It’s near the Indian River and is the common stop for cruise ships visiting Dominica (which is not often).  I’d recommend staying at The Champs, one of the nicer places in Portsmouth.

If you are interested in staying in Roseau, St James Guesthouse is an eclectic B&B, or Fort Young Hotel, which is an upscale resort with a stunning pool view!

We struggled to get internet going in Dominica.  We bought a week of HotHotHotSpot but it was not working at all. I went to the Purple Turtle bar in Portsmouth to try to sort it out. The Purple Turtle has amazing wifi – I was able to make several calls to family and catch up on all the internets!  We ended up paying for the Winet wifi (2.5 Mb/s) but if we really need fast internet we would go to Purple Turtle again (12 Mb/s).

We had arranged with Titus to take the Indian River Tour. This is the main attraction here in Portsmouth. It is a national park, so you have to have a certified guide. Our guide’s name was Marcus. He was extremely knowledgeable about the flora and fauna. The tour was a one-mile row ending at the Bush Bar for a drink and then back down. It’s a beautiful jungle. The tour was $5USD per person for the park fee and then $20 USD to Marcus, plus we tipped him.

Wednesday we arranged through Titus a tour around the island. The bus picked us up at 8:30 and met our tour guide, Dylan. We were in the van with four other people, two French-Canadian cruisers and a couple in a charter, a German woman, and a man from the east coast of Africa. Everyone except us spoke French and the man from Africa didn’t speak much English, so Dylan did the tour bilingually.

We headed north and then east in the tour, making our way around to the east coast of the island. We got to see some spectacular views of the Atlantic Ocean and beautiful beaches.

Near the town of Calibishie, we stopped to see the Pointe Baptiste Red Rocks, which were like a little patch of Mars on earth.  The prevailing winds and the crashing Atlantic Ocean have carved this side of this coast, exposing the iron-rich red soil here.  Pockets of black and white sand beaches exist if you know where to find them!

Our next stop was an abandoned sugar mill.  We wandered around the remaining structures while Dylan told us about the history of sugar mills in Dominica.  In the early 1800s, Great Britain had a well-established colony here, exporting sugar and coffee with the use of slaves.

As with most of the Americas, Dominica was originally inhabited by the Caribe people, also known as the Kalinago.  Dominica is the only island in the eastern Caribbean with a native population left.  About 3,000 Kalinnago people live on the 3,700-acre reservation.  The reservation has been pretty well isolated from the modern world, but recently it’s encouraged tourism.  I wish we had stopped longer than just a gift shop.

Lunch at The Island View

We also stopped for lunch at The Island View to sample some local cuisine.

My favorite stop was the Emerald Pools, nearly in the center of the island.  We went for a nice dip in the pool, which was a perfect cool off after a long day.

End of the Tour

To top it all off, early in the tour Dylan would stop along the road and pick stuff for us; Job’s Beads, bay leaves, cinnamon bark, citronella leaves and more. He also provided us with snacks; local bananas and grapefruit.  We didn’t get back to Portsmouth until 7 pm! 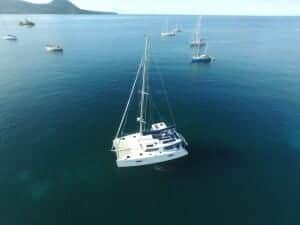 Sailing Dominica in the West Indies
We use cookies to ensure that we give you the best experience on our website. If you continue to use this site we will assume that you are happy with it.OkPrivacy policy