Passage through the Florida Bay

We departed Palmetto Thursday morning at 9 am.  I have done a ton of research on this route, speaking with other boat owners and delivery captains to determine that yes, we can cut through the Florida Bay instead of going around the Keys.

The biggest hurdle is the Snake Creek Bridge. Our friend Rick, back in Palmetto, had brought his St Francis 50 through with a skipper, David. Rick put us in contact with David who lives in Tavernier Key and eased my concerns about the passage and the bridge. David said we needn’t worry about the tide, we should be just fine making it through.

The winds were very light out, so we motor sailed quite a bit in the beginning. Eventually, the wind did pick up a bit and we got to roll out our screecher. We need more practice on this. I have a had time managing the continuous line furler and keeping it from getting tangled.

The wind did die again, so we motor sailed through the night. We arrived at Cape Sable in the late morning on Friday.

From Cape Sable, we made our approach to the Florida Bay Channel.  The channel is pretty shallow, and it was making David nervous because we didn’t quite know if our depth sounder compensated for our keel depth or not. So, we performed our own test – David stopped the boat while I got out the boat hook, fully extended, and tried to touch the bottom of the channel with it. I couldn’t, so the water was easily 7+ feet deep and our depth sounder was reading water under our keel, not total depth.

The passage through the channel was uneventful, until the final step – the Snake Creek Bridge. The bridge opens, so the concern was the power lines just to the west of the bridge. The bridge control lady was very nice and responsive to our radio hails (despite what I had read online). The bridge opens on the hour every hour until 6 pm when it opens on demand. We were not the only ones coming through. On the radio, we chatted with two sailboats coming westbound, who were kind enough to allow us to go first.

And we made it! The current was strong, pushing us along, so we got to the point of no return and squeezed under. Thanks, Rick and David for the advice!

Continuing on to Cross the Gulf Stream

My David called his parents, who checked the Gulf Stream forecast for us, and we decided that the conditions looked better for overnight sailing than during the day Saturday, so instead of anchoring at Tavernier Key, we went for it to Bimini.

It was pretty calm through most of the night, getting a bit rough around our shift change at 1:30 am. At 9 am, we motored into Bimini!

I know that makes it sound super easy. The Gulf Stream crossing tends to get built up in the sailing community. This was my third crossing of it, and as long as you watch for the right weather window, it’s a piece of cake!

Watch the Video:  Sailing from Palmetto to the Bahamas 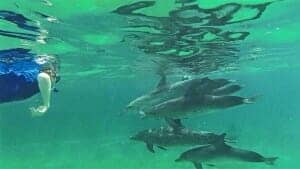 Bimini Bahamas for Three Days
We use cookies to ensure that we give you the best experience on our website. If you continue to use this site we will assume that you are happy with it.OkPrivacy policy