Most of the tourism in the Maldives is all-inclusive resorts or liveaboard dive boats.  There are definitely some benefits of the tourism industry here, such as the government requiring resorts to employ a certain percentage of locals or the tourism industry boosting the economy.  The Maldives went from being one of the twenty poorest countries in the world to an upper-middle income economy.  But I suspect that most tourists to the Maldives come for the luxury experiences and the beautiful views, not the history and culture of a place like Utheemu.

When we arrived in Utheemu, we meet a man named Bale in the wharf.  As another great example of the hospitality of Maldivians, Bale acted as our tour guide to Utheemu, showing us his island and answering our questions.

The History of Maldivian Freedom

Muhammad Thakurufaanu was born on the island of Utheemu, which is in the Haa Alif Atoll in the north of the Maldives.  The palace where he lived is still there, preserved as a museum – the Utheemu Ganduvaru residence.

Silly us, we didn’t pay attention to the public holiday schedule and came to Utheemu on a holiday.  The museum was technically closed, but Bale made a phone call for us, and got the palace unlocked!

Details of the thatching.

The entire island has a square developed area, 500 m long on each side.  The government has designated the western side is a tourism zone,   I assume that this means that there are plans to develop a resort with a bikini beach and alcohol area (both of which are otherwise not allowed).

The beaches are stunning, with the reef surrounding the island turning the water several colors and the palm trees standing in white, soft sand.

A very old kanni tree grows outside the palace.  Maldivians use this wood to make tools for weaving fabric.  Supposedly this tree grew from a post used to weave during Muhammad Thakurufaanu’s time, making the tree hundreds of years old.

Like all inhabited islands in the Maldives, there’s a large Mosque.

Soccer fields are also very popular.  To keep them low-maintenance, the feilds are astroturf.

Some of the locals keep birds for pets, like these two chained to the table.

Just like in Uligamu, the school runs on solar power.

The local government is doing a lot of construction, building new houses and other infrastructure.

Not much grows on the sandy atolls of the Maldives, but passionfruits are popular.

A traditional Maldivian sailboat in the harborfront.

Little Dipper tied up in the wharf.

Utheemu has a brand new harbor.

To our surprise, Bale showed us a massive shipbuilding operation.  This boat in the shed being built is HUGE!

Bale’s brother owns Beach Taste, one of the only two restaurants on the island.  Bale called ahead so that we could have a traditional Maldivian meal.

Mas huni, a Maldivian dish typically eaten for breakfast, made of coconut and tuna.

How to get to Utheemu

Most of the nearby resorts, like the Hideaway Beach Resort & Spa, can arrange transportation to Utheemu for a day trip.

Thanks to Bale for our awesome little tour of Utheemu! 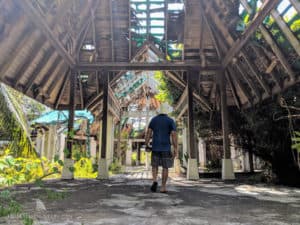 Exploring the Abandoned Zitahli Resorts on Dholhiyadhoo
We use cookies to ensure that we give you the best experience on our website. If you continue to use this site we will assume that you are happy with it.OkPrivacy policy