The Wonderful Sail 2 Indonesia Rally stopped in Pasarwajo, a small village on the island of Buton.  This would be one of our big stops thanks to the Festival Pesona Indonesia Budaya Tua Buton, but the festival was not just one day!  Two days before the grand party, our local tourism official, Rusdi, and his wife held a cooking class.

Kasoami is steamed cassava buns.  Rusdi took us out to the garden to show us the cassava root.  Back in the classroom, the cassava root was precooked, and we learned how the locals sift and grate the cassava.  We each took handfuls of the cassava and put them in traditional steaming baskets over a stove, and the cassava steamed for about 15 minutes.  It comes out slightly browned on the top and sticky.

Sifting and grating the cassava. You rub it against the woven basket.

Rusdi showing us the cassava flour you can find in the market – much less work.

We all did the prep work for our own soup.  We chopped up the ingredients, some of which I had never used before:

Everything was put in the pan in order, allowing the first few ingredients to fry in the oil first.  Once the tuna is cooked, it’s done!

Tuli-Tuli and Onde-Onde are made with the same base, a cassava-based dough.  To make the dough, water was boiled and cassava flour was added in and stirred until it was a thick porridge.  That porridge was poured into more flour and worked until smooth and not too sticky.

To make Tuli-Tuli, a section of dough was rolled out into a small tube.  The dough was formed into a figure 8 shaped and then deep fried.  Tuli-Tuli is served with sambal, a mixture of chilis and other ingredients.  The other ingredients can depend on the region of Indonesia.  Tuli-Tuli tastes like funnel cake, and would be delicious with some powder sugar!

Onde-Onde is made by taking a small amount of dough and rolling it into a ball.  Then, using your thumbs, you make it into a cup and put some palm sugar in the middle.  Close the ball up and then boil it and roll it in shredded coconut.  The palm sugar melts on the inside when it is boiled, and the ball should be small enough that you can pop it into your mouth with one bite!

Melted palm sugar on the inside.

The Market in Pasar Wajo

Kimi from Slow Flight, Viki from Sail on Sailor, and I hired a car to take us to the market in Pasar Wajo, and one of the tourism board people came with us to help translate.

My market purchase. All this costs less than $10 USD.

The market was amazing, and since we’ve been in Indonesia almost a month now I am more comfortable with the atmosphere and with the few Indonesian words that I know.  I was also armed with Google Translate on my phone!

Winged beans are like long beans with ruffles!  The ruffles are soft and the bean has a nuttier texture than a green bean.  I put them in a chicken and coconut milk stir fry, but you can use them in any recipe which calls for green beans.

Gambas or Luffa vegetable is the young, immature fruit of the vine, and when allowed to grow to maturity it is harvested, cleaned, and dried as a loofah (yes, the original loofah, not the plastic thing).

I used a paring knife to cut off the hard ridges and then browned the slices in oil before adding some water to finish by steaming.  They cook very quickly, and I thought they were like zucchinis but sweeter and with a spongier texture.  I would use them in place of zucchini in any recipe.

Serious Eats articles on the luffa.

One creative use of a Belimbing would be to throw it in a cocktail in place of a lime.  The juicy sourness of the fruit would add flavor to a gin and tonic very nicely.  Otherwise, the belimbing needs to be fully cooked as it was in our Sup Ika.  The sourness is gone and instead, the fruit becomes soft instead of crispy.  It still has a bit of tang though!

Palm sugar (gula jawa) is very popular in Indonesian cooking, but it is nothing like the palm sugar that comes up with you google “palm sugar”.  Gula jawa has a strong flavor – it’s not just sweet – but is used in all kinds of dishes as a sweetener.

A one hour drive over the mountains gets you to the city of Bau-Bau.  In Bau-Bau is a Hypermart, a very decent sized grocery store.  The meat and cheese selection was great.  There were some cereals (as opposed to no cereals in Tual), but no mayonnaise or UHT milk (but HEAPS of chocolate UHT milk).

That’s just a taste of what we found in Pasarwajo.  I am loving the Indonesian markets and can’t wait to try some more local produce! 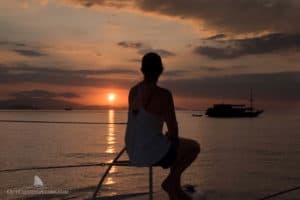 7 Days with Komodo Dragons & Manta Rays in Indonesia
We use cookies to ensure that we give you the best experience on our website. If you continue to use this site we will assume that you are happy with it.OkPrivacy policy