We made two stops on Hook Island.  The first was Stonehaven Bay on the west side, and the second was West Butterfly Bay on the north side.  During our stay on Hook Island, the tradewinds were blowing pretty strong, 20 knots or so, and the nearby landscape funnels these winds around.  It was worse in Stonehaven, where we didn’t even get off the boat.

Thanks to the wind and current, mooring balls often bang against the hulls.

West Butterfly Bay is really long and narrow, with nine mooring balls.  We tucked ourselves into the second innermost mooring ball, and the swell wasn’t as bad as the further out moorings.  However, the wind was still an issue, especially because it was sporadic.  The winds would howl through our riggings for 30 seconds, and then calm down for a few minutes before howling again.  Wind bullets.  With the gusts of wind and the opposing currents, Starry Horizons was really dancing on the mooring.

We did, however, get out for a snorkel and our FIRST DIVE with our own gear, which was very exciting!  We’d bought our gear in Coffs Harbour in December, but the water clarity hasn’t been good enough to dive very much along the East Coast.  The coral in West Butterfly Bay is quite good, although we had heard other bays are not fairing as well.  Here are some shots from our time underwater.

Amy diving with some soft corals.

This uber friendly sea turtle let us get pretty close.

I’m pretty sure this is the biggest giant clam we’ve ever seen.

Freediving to get up close and personal with coral.

From Hook Island, we left directly for Cairns, a two-night sail north.

Map and information about moorings in the Whitsundays.

Watch the Video: Celebrating my BIRTHDAY in the Whitsundays! 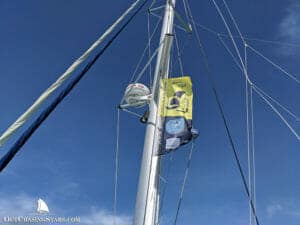 Introduction to the Wonderful Sail 2 Indonesia Rally
We use cookies to ensure that we give you the best experience on our website. If you continue to use this site we will assume that you are happy with it.OkPrivacy policy